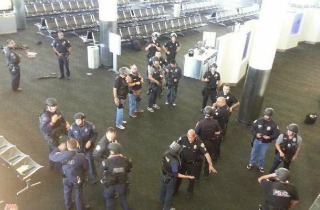 While few details are known about the 23-year-old man identified as the LAX shooter, Paul Anthony Ciancia, or why he attacked Transportation Security Administration officials at the Los Angeles international airport, some aspects of his life are beginning to emerge in the press.

While Ciancia’s motive remains unclear, reports indicate that he did not intend to be captured by police:

“Police say the shooter’s brother got a text message from Ciancia Friday saying he was thinking about taking his life,” NBC News reported on Friday afternoon based on information provided by anonymous police sources.

Whiles Ciancia resides in Los Angeles, he grew up in Pennsville in Salem County, New Jersey.

The Associated Press reports that Ciancia entered the airport with a rifle and wearing fatigues. He reportedly had “anti-government literature” on him at the time of his capture and possessed a note which warned that he “wanted to kill TSA and pigs.”

Ciancia shot three people, killing one TSA worker, before he was incapacitated by police.

The shooter remains in critical condition at hospital along with one of his victims. Another of Ciancia’s shooting victims remain in hospital in fair condition.

UPDATE: A New Jersey police chief told CBS News that Ciancia’s father had received a text message from his son “in reference to him taking his own life.”