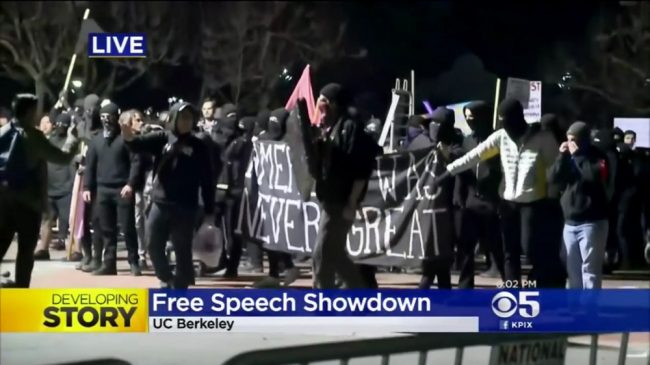 The far left, which dominates too many colleges in the United States, scored another victory on Wednesday after controversial author Ann Coulter cancelled her planned speech at the University of California, Berkeley, due to threats of violence.

No one should be surprised by this totalitarian reaction from the campus left at this point. During the first four months of 2017, anti-conservative forces at Berkeley rioted outside of Milo Yiannopoulos‘ speech, vandalized College Republicans’ signs, and forced the cancellation of a planned speech by conservative author David Horowitz.

This kind of thuggish behavior isn’t limited to the notoriously liberal school, either. During the same time period, left-wing protestors violently shut down a lecture by Charles Murray at Middlebury College in Vermont in March, and disrupted presentations by conservative author Heather MacDonald at UCLA and Claremont McKenna College in California the following month.

Back in 2016, protesters at California State University in Los Angeles blockaded the venue of blogger Ben Shapiro‘s speech and pulled its fire alarms. DePaul University in Chicago banned Shapiro from speaking there later in the year due to “security concerns.”

The left’s dominance isn’t limited to enforcing the hecklers’ veto with conservative speakers. A student sued the Los Angeles Community College system in early April 2017 over their high-restrictive “free speech zones” on campus. Nearby, at Orange Coast College, the faculty honored a psychology instructor who labeled President Donald Trump’s election an “act of terrorism.”

On the other side of the U.S., students and faculty alike at Providence College in Rhode Island shamed orthodox Catholic professor Anthony Esolen for daring to criticize the leftist politics of “diversity.”

It’s no wonder that state legislators in liberal Colorado recently passed legislation to ban “free speech zones” at publicly-funded colleges and universities. Virginia, Missouri, and Arizona have similar laws, but much more work needs to be done to protect non-leftist viewpoints in academia.

For too long, radical left-wing activists have emulated the Red Guards from Mao’s Cultural Revolution in communist China. Besides their rioting at speaking events on campus, they’ve repeatedly vandalized conservative newspapers, rejected official recognition of right-leaning clubs on campus, and complain that prominent Republican politicians make them feel “unsafe.”

A handful of liberals, such as Bill Maher, Bernie Sanders, and Elizabeth Warren have spoken out against the actions targeting Coulter’s planned speech at Berkeley. They should be commended for standing up the mob mentality among much of the campus left.

However, as Maher himself pointed out earlier in 2017, liberalism is at a “perilous point.” The extremist ideology that motivated all of the recent violence against conservatives across the country is a direct threat to the viability of freedom of speech in the United States.

People from all parts of the political spectrum need to stand up to these totalitarians-in-training. Otherwise, we can expect more of the same in the future.