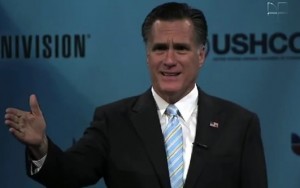 In light of Mitt Romney‘s decisive win in Illinois on Tuesday, Rush Limbaugh had some positive things to say about him based on Romney’s acceptance speech. Agreeing with the notion that the primary is moving candidates farther to the right, Limbaugh argued the conservative alternative to Romney might be Romney himself — if he can avoid an Etch A Sketch shakeup during general election campaigning.

RELATED: Limbaugh: Obama Supporters ‘Don’t Want To Admit That The First Black President Is A Failure’

Limbaugh said the candidates’ shift to the right was evidenced in Romney’s Tuesday night acceptance speech, and then played the following clip from the speech:

“The simple truth is, that this president doesn’t understand the genius of America’s economy, or the secret of the American economic success story. The American economy is fueled by freedom. The history of the world has shown that economic freedom is the only force that has consistently lifted people out of poverty. It’s the only principle that has ever been able to sustain prosperity. But over the last three years, this administration has been engaged in an all-out assault on our freedom.”

“The crowd ate it up,” Limbaugh said. “This is good! This is his best victory speech yet, I just hope he means it.”

He then played the clip during which Romney said:

“A regulator would have shut down the Wright Brothers for their ‘dust pollution.’ And the government would have banned Thomas Edison’s light bulb. Oh, that’s right. They just did.
[…]
Nothing is more fragile than a dream. The genius of America is that we nurture those dreams.” But job-killing regulation is crushing dreams.”

“Right on!” Limbaugh cheered. “So maybe the conservative alternative to Romney is Romney. Let’s hope so. It all boils down to whether he means this. It’s that simple.”

He went on to note that even Rick Santorum, campaigning in Pennsylvania, said he was glad to see Romney moving to the right. Touting his stance for restoring freedom, Santorum said, “I was pleased to hear before I came out that Governor Romney is now adopting that theme. […] I am glad we are moving the debate in the Republican Party.”

Limbaugh said Santorum’s right: “Somebody’s moving Romney in that direction, and Romney’s willingly moving there.” He went on to warn that we can’t be sure that Romney’s newfound conservatism will last, citing none other than Wednesday morning’s Etch A Sketch gaffe:

Romney’s own campaign is saying that what he said last night, that’s just part of getting the nomination. We’ll wipe it out when we get into the general. Don’t worry, we’ll do the right things to get the moderates. That’s what this guy is saying, and that’s why people are saying it’ll be great if Romney believes it last night. That’s all. You heard it.

One thing everyone seems to agree on is that we can’t trust Romney’s positions won’t change.