Limbaugh Rails Against Media For Blaming U.S. For Boston Bombings As If ‘Islam Had Nothing To Do With This’
AUDIO

Limbaugh Rails Against Media For Blaming U.S. For Boston Bombings As If ‘Islam Had Nothing To Do With This’

Rush Rails Against Media For Blaming U.S. For Boston Bombings As If 'Islam Had Nothing To Do With This' 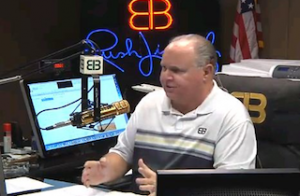 Today on his radio show, Rush Limbaugh explored a new “meme” he seeing in the mainstream media that says the United States is the blame for driving the Boston bombers and other terrorists to carry out their attacks. “Is it still jumping to conclusions to link Islam to this bombing?” Limbaugh asked, before answering that according to the consensus he’s hearing out there, “Islam had nothing to do with this.”

Limbaugh pointed to an interview Michael Scheuer gave on Fox News this morning, in which the former CIA intelligence officer defended a recent blog post that states the Boston bombers were “motivated by what the U.S. government does in the Muslim world and not because of our freedoms, liberties, and gender equality.” Scheuer told Fox’s Jenna Lee that if the U.S. did pull out of the Muslim world, there would likely be less attacks like the one in Boston. “You just have to come to grips with the fact that people don’t like to be invaded or bombed by anybody.”

Making the case that terrorism is more rooted in religion than politics, Limbaugh asked, “Why would the jihadists be attacking anybody but us? Nobody else is supporting Israel the way we do. Nobody else invaded Afghanistan. Nobody else invaded Iraq. And yet the jihadis are all over the world trying to convert people, the infidels.” Wondering why that might be, he asked, “You think it might have something to do with the fact that they’re infidels, that they have not accepted Sharia, that they maintain their own religious independence from Islam?”

After playing more examples of media figures highlighting the wars in Iraq and Afghanistan as motivating factors for the attacks, a piece of information that came out of the Dzhokhar Tsarnaev‘s hospital bedside hearings, Limbaugh wondered why more people were not reporting that the suspect was an “Obama supporter.”

He asked why the suspect would “celebrate Obama’s re-election on Twitter” if he was really so angry at America. “Maybe Dzhokhar doesn’t know that Obama’s doing all this,” Limbaugh said, referencing the ongoing Afghanistan War and the administration’s drone program. “Maybe Dzhokhar thinks Obama’s trying to stop it all, like all the low-information voters in this country believe that Obama’s got nothing to do with anything that’s happening.”

So far, from the little information that has emerged from the initial Tsarnaev hearings, it appears that Islam and U.S. foreign policy, two elements that are difficult to disentangle, both played a role in the bombers’ motivations. Limbaugh evidently sees a plot by the media to highlight one and bury the other.