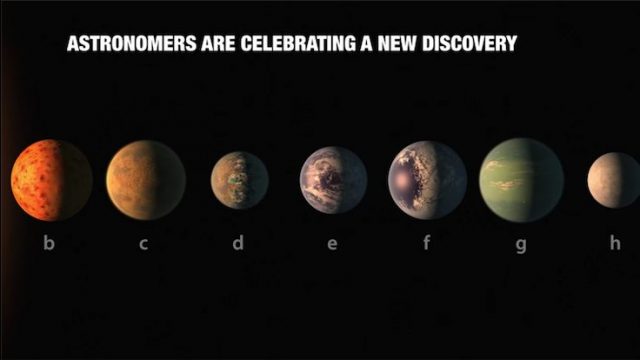 If you’ve been anywhere near a computer today, you probably heard that today NASA announced the discovery of seven “earth-sized planets in the habitable zone around a single star outside our solar system.” Naturally, this got people thinking about moving to one of these planets, because why go to Canada when you can literally leave earth? Pretty much everyone had the same question: When can we move there?

NASA found 7 planets orbiting a nearby star. When can we move?

Who wants to move to #TRAPPIST1? @NASA pic.twitter.com/kLfGS7isBz

NASA found 7 new planet like surfaces. Which one can I move to I’m done with y’all.

NASA: We found 7 planets!
Me: Cool can I move there to escape Trump? pic.twitter.com/OBgdwy2q1S

When your bags are packed, and you’re just waiting for NASA to say you can move to TRAPPIST-1. pic.twitter.com/uO5EfBj69s

How soon until we can move? https://t.co/T0zJ6ghms9

Okay so NASA found 7 planets… Can we legit just have a planet full of LGBTQIA+, we can all move there.

@NASA when can I move? ???? pic.twitter.com/tTrNpefLzS

Let us move to a new planet https://t.co/2CT8HlD0cx

YES at NASA serving us new planets. With the way the last year has unfolded, I’m ready for aliens to touch down and probe me and take me. pic.twitter.com/eAmRWzQR0N

petition that all the gays move to planet F pic.twitter.com/GXPrMoyEwO

Me leaving earth once NASA confirms which of the 7 planets is habitable pic.twitter.com/CNcltjhjll

“NASA found seven planets that are similar to earth and three of them are most likely habitable” pic.twitter.com/3gWEnLQIRl

nasa discovered seven new planets tht may have life&now im just waiting for aliens to discover earth&abduct me so i can finally escape earth pic.twitter.com/FTRsV7XOyS