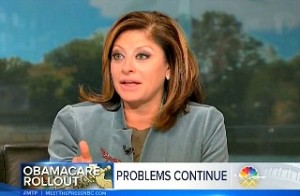 (UPDATE BELOW) CNBC anchor Maria Bartiromo is leaving for rival channel Fox Business Network, according to the Drudge Report. Sources close to the deal reportedly told Drudge that Bartiromo will be anchoring a “daily market hours program” on the network, and she will also make appearances on Fox News.

The news does not come as a complete surprise, as a New York Post report from earlier this year said Bartiromo was shopping around to other networks, including FBN and CNN. At the time, a Fox Business spokesperson denied they were having “serious discussions” with Bartiromo.

The network has yet to confirm Bartiromo’s move, but New York Times TV reporter Bill Carter independently confirmed the news on Twitter.

This is the splash as it appeared on The Drudge Report. 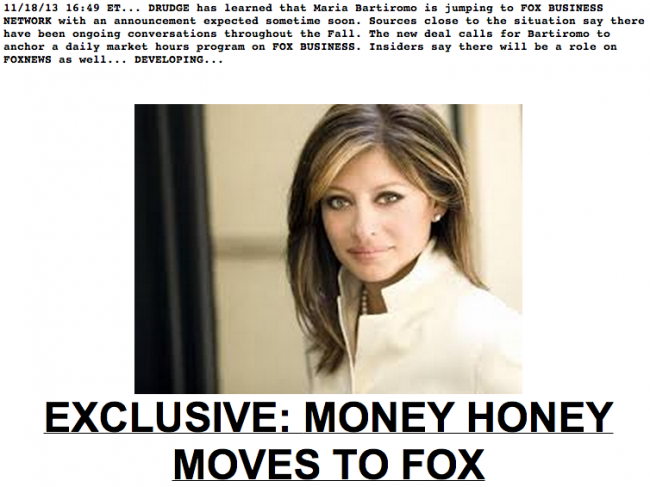 UPDATE: CNBC provided a statement to TVNewser announcing Bartiromo will be departing the network after her contract expires next week.

“After 20 years of groundbreaking work at CNBC, Maria Bartiromo will be leaving the company as her contract expires on November 24. Her contributions to CNBC are too numerous to list but we thank her for all of her hard work over the years and wish her the best.”

UPDATE #2: Bartiromo provided a statement on her departure from CNBC.

“After twenty great years of having a front row seat to some of the most important economic stories in the world, it’s hard to sum up the gratitude and appreciation I have for the team that helped make it happen. I am incredibly proud of what we have been able to accomplish. I want to thank all the people at CNBC who have been with me on this journey, and of course the viewers and investors everywhere for making me love every minute of it.”