Mark Udall Donor Fed Up: ‘Abortion Is All He F*cking Talks About’

Mark Udall Donor Fed Up: ‘Abortion Is All He F*cking Talks About’ 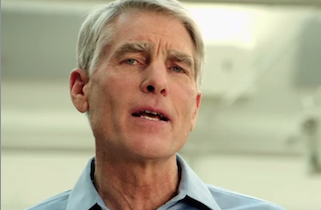 As Sen. Mark Udall (D-CO) heads into a tight and divisive Election Day tomorrow, he has apparently lost the support of one of his biggest donors. The Guardian reported that during a campaign event Sunday afternoon, Udall was audibly heckled by Leo Beserra, a millionaire businessman who has donated more than $10,000 to Colorado Democrats during this campaign cycle.

When Udall told his supporters that he’s “proud to stand with Colorado’s women” and “proud to stand for reproductive freedom,” Beserra reportedly shouted back, “That’s not the only thing you stand for! Jesus Christ!” He repeated his comment after Udall passed to ask, “I’m sorry?”

“I’m trying to figure out who in the hell decided this was how the campaign was supposed to go,” the donor told The Guardian after Udall’s speech. “Who is running the worst campaign? Him. Because fucking abortion is all he talks about. He should not talk about it any more whatsoever. There are so many other issues.”

Later, Udall told The Guardian that he was highlighting reproductive rights to emphasize the differences between his views and his opponent’s, Rep. Cory Gardner (R-CO). “This is emblematic, for me, of his extreme positions,” he said. “I’ve said reproductive freedom is important to millions of Coloradans and their families. The important thing to remember is that Congressman Gardner’s focus on limiting those reproductive freedoms is an indication of his extreme position on everything from climate change to affordable college tuition, to protecting social security and Medicare.”

Most polls have Gardner up by about 2 points with one day to go before the election. According to Nate Silver’s FiveThirtyEight, the Republican has a 72% chance to taking the seat away from Udall.