Mass Exodus at The New Republic After Major Editorial Shakeup

Mass Exodus at The New Republic After Major Editorial Shakeup 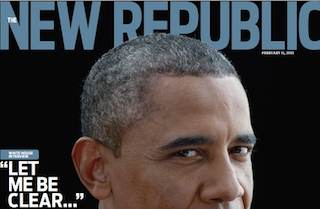 On Thursday, The New Republic’s top editors Franklin Foer and Leon Wieseltier announced they would be leaving the magazine over disagreements with publisher Chris Hughes about its newly-stated direction. Now, it appears that most of the editorial staff is going with them.

The mass exodus follows the decision by 31-year-old Hughes, formerly of Facebook, and chief executive Guy Vidra, formerly of Yahoo, to reimagine the property as a “vertically integrated digital media company,” reducing the number of print issues from 20 per year to 10 and moving the company from Washington, D.C. to New York. Upon Foer’s departure, the magazine has installed former Atlantic Wire editor Gabriel Snyder as the new editor-in-chief.

On Friday, dozens of writers and contributing editors began to announce that they would be leaving the magazine in solidarity with Foer and Wieseltier, many making their views about the changes known on Twitter:

Dear @TNR and @chrishughes, please immediately remove me from your masthead as a Contributing Editor. http://t.co/au7HNKDvoq

I guess it goes without saying that I'm with @RyanLizza. @tnr please remove me from your contributing editors. https://t.co/cKDmucx3CS

Please add me to the long list of people resigning as contributing editors to The New Republic. @RyanLizza @chrishughes @jonathanchait

My recent time @tnr has been some of my happiest as a writer, but I can't abide its new direction, so I've resigned.

Today I join my friends and colleagues who have walked out of The New Republic in protest, and resign as a contributing editor.

After 8 years, I'm leaving The New Republic, along with many of my colleagues and friends. It has been such a privilege to work with them.

So proud of the work we did @tnr and grateful for my brilliant, funny, decent colleagues. It was a joy and an honor to work there.

Never been happier as a writer than at @tnr w/@FranklinFoer @gpveis @RachelMorris Leon et alia. Having resigned doesn't imply being resigned

So I just resigned from @tnr. People do muuuuch harder things every day. But boy was it brutal. A great ride for 14 years.

Absolutely gutted to quit the best job with the best colleagues I ever had. It's been a joy every single day. https://t.co/mbJAgbRraL

Lizza published a full list of the resignations Friday morning:

Despite the pleas from Lizza and others to be removed from the website’s masthead, as of Friday afternoon, it remains intact. But The Huffington Post’s Michael Calderone has helpfully taken a red pen to the list to show a more accurate representation of how still works there: 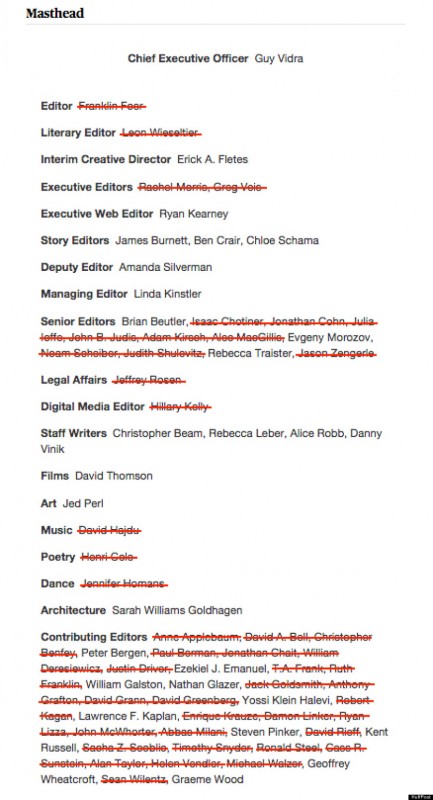