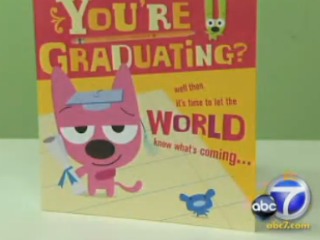 So here’s a confession: For most of my life, I was convinced Sam Cooke‘s wonderful “Twistin’ the Night Away” included the lyric “dancing with the chicken slacks.” Turns out he’s actually singing about someone dancing with a “chick in slacks,” but come on. I know what I heard! And I was fairly sure, for years, that someone, somewhere, was dancing while wearing a pair of pants made of chickens, even if this made absolutely no sense whatsoever.

Possibly unrelated: In the summer of 2010, the Los Angeles branch of the NAACP has asked Hallmark to pull a card from store shelves because the group believes the product’s recorded message includes a very nasty remark about black women. But, according to the company, the solar system-themed graduation card — which makes various references to and puns about things in outer space — discusses “black holes” and not, well. Something that sounds similar.

While the story unfolded over a year ago, it’s been gaining attention again this week, popping up on popular news sharing site Reddit and making it into BuzzFeed (where I saw it for the first time, so, hey. It’s new to me). Why? A theory: We’re coming down, post-hurricane media frenzy, while simultaneously gearing up pre-9/11 anniversary media frenzy. No Senator has sent an intern or Twitter follower a picture of his genitals this week and Sarah Palin had been relatively quiet. So what captures our collective interest? Special interest stories. And, naturally, allegations of racism. And puppies. But mostly allegations of racism.

Have a look at the original news report, via ABC 7: