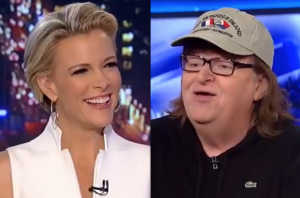 During an affable interview on Thursday’s Kelly File, liberal filmmaker and fervent Bernie Sanders supporter Michael Moore sat down with host Megyn Kelly to discuss — surprise surprise — the Trump phenomenon and his presumptive nominee status within the Republican party. But while many have opined that Trump can successfully court disenfranchised Sanders voters who identify as part of the #NeverClinton movement, Moore was having none of it.

“Biggest landslide loss ever!” Moore exclaimed, predicting the fact that Trump’s divisive rhetoric has turned away too many voters already.

At the conclusion of the interview after Kelly promoted Moore’s new film Where to Invade Next?, he suddenly switched topics to address the rumors that the fan-favorite host will be leaving the show at the end of her contract.

MOORE: And listen, whatever you decide to do, you’re like the LeBron James here at Fox News, you’re a free agent. Year to year, I’ve read the gossip columns, you may be going to ABC, or wherever..

KELLY: Oh wow! You know more than I do!

MOORE: Yes, I know many things. One, that Trump is going to lose, and you won’t be here very long.

The Fox News host took it in stride, laughing along at the suggestion that she may be vacating her coveted 9 p.m. seat at the network this year. In an interview with Variety last month, Kelly spoke about the possibility of leaving the network, fueling rumors that she may be headed for new pastures soon. She said, “I don’t know what’s going to happen. I’ve had a great 12 years here, and I really like working for Roger Ailes. I really like my show, and I love my team. But you know, there’s a lot of brain damage that comes from the job. There was probably less brain damage when I worked in the afternoon. I was less well known.”

Moore concluded with some advice for his pal, saying, “Get yourself a good agent, [and] a good lawyer.”

Watch the above exchange from Fox News’s Kelly File.