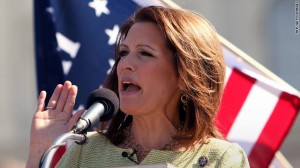 The Family Leader, an Iowa-based political group with the stated mission to promote Christian conservative social values, has been asking Republican candidates to sign a pledge titled “The Marriage Vow – A Declaration of Dependence upon Marriage and Family.” Rep. Michele Bachmann recently signed the pledge, and now some are in uproar that she may also have agreed to ban pornography.

The actual pledge that she signed isn’t terribly surprising for a social conservative like Bachmann; it contains many platitudes like “marriage is between man and a woman.” Oh, and there are parts to the pledge that calls homosexuality a “choice,” which is then likened to bigamy, adultery and polyandry.

Presidential candidates who sign the pledge must agree to personal fidelity to his or her spouse, the appointment of “faithful constitutionalists” as judges, opposition to any redefinition of marriage, and prompt reform of uneconomic and anti-marriage aspects of welfare policy, tax policy and divorce law.

The Marriage Vow also outlines support for the legal advocacy for the federal Defense of Marriage Act, humane efforts to protect women and children, rejection of Sharia Islam, safeguards for all married and unmarried U.S. military service members, and commitment to downsizing government and the burden upon American families.

In addition, candidates are asked to recognize that “robust childrearing and reproduction is beneficial to U.S. demographic, economic, strategic and actuarial health and security.”

Alice Stewart, a Bachmann aide, said the congresswoman had no qualms about signing the Family Leader’s pledge. “She has been married for over 30 years and has a strong marriage and faith.”

ThinkProgress has noted that, in their esteem at least, the pledge also include a stipulation that bans pornography:

PORNOGRAPHY SHOULD BE BANNED: Vow 9 stipulates that the candidate must “support human protection of women and the innocent fruit of conjugal intimacy” and protect them from “seduction into promiscuity and all forms of pornography…and other types of coercion or stolen innocence.”

But the actual vow signed by Bachmann doesn’t explicitly call for a ban on pornography, per se. Read the vow portion below (click here for the .pdf file)

The Candidate Vow:
Therefore, in any elected or appointed capacity by which I may have the honor of serving our fellow citizens in these United States, I the undersigned do hereby solemnly vow* to honor and to cherish, to defend and to uphold, the Institution of Marriage as only between one man and one woman. I vow* to do so through my:
–Personal fidelity to my spouse.
–Respect for the marital bonds of others.
–Official fidelity to the U.S. Constitution, supporting the elevation of none but faithful constitutionalists as judges or justices.
–Vigorous opposition to any redefinition of the Institution of Marriage – faithful monogamy between one man and one woman – through statutory-, bureaucratic-, or court-imposed recognition of intimate unions which are bigamous, polygamous, polyandrous, same-sex, etc.
–Recognition of the overwhelming statistical evidence that married people enjoy better health, better sex, longer lives, greater financial stability, and that children raised by a mother and a father together experience better learning, less addiction, less legal trouble, and less extramarital pregnancy.
–Support for prompt reform of uneconomic, anti-marriage aspects of welfare policy, tax policy, and marital/divorce law, and extended “second chance” or “cooling-off” periods for those seeking a “quickie divorce.”
–Earnest, bona fide legal advocacy for the Defense of Marriage Act (DOMA) at the federal and state levels.
–Steadfast embrace of a federal Marriage Amendment to the U.S. Constitution which protects the definition of marriage as
between one man and one woman in all of the United States.
–Humane protection of women and the innocent fruit of conjugal intimacy – our next generation of American children –
from human trafficking, sexual slavery, seduction into promiscuity, and all forms of pornography and prostitution,
infanticide, abortion and other types of coercion or stolen innocence.
–Support for the enactment of safeguards for all married and unmarried U.S. Military and National Guard personnel,
especially our combat troops, from inappropriate same-gender or opposite-gender sexual harassment, adultery or intrusively intimate commingling among attracteds (restrooms, showers, barracks, tents, etc.); plus prompt termination of military policymakers who would expose American wives and daughters to rape or sexual harassment, torture, enslavement or sexual leveraging by the enemy in forward combat roles.
–Rejection of Sharia Islam and all other anti-woman, anti-human rights forms of totalitarian control.1
–Recognition that robust childbearing and reproduction is beneficial to U.S. demographic, economic, strategic and actuarial
health and security.
–Commitment to downsizing government and the enormous burden upon American families of the USA‟s $14.3 trillion
public debt, its $77 trillion in unfunded liabilities, its $1.5 trillion federal deficit, and its $3.5 trillion federal budget.
–Fierce defense of the First Amendment‟s rights of Religious Liberty and Freedom of Speech22, especially against the
intolerance of any who would undermine law-abiding American citizens and institutions of faith and conscience for their adherence to, and defense of, faithful heterosexual monogamy.