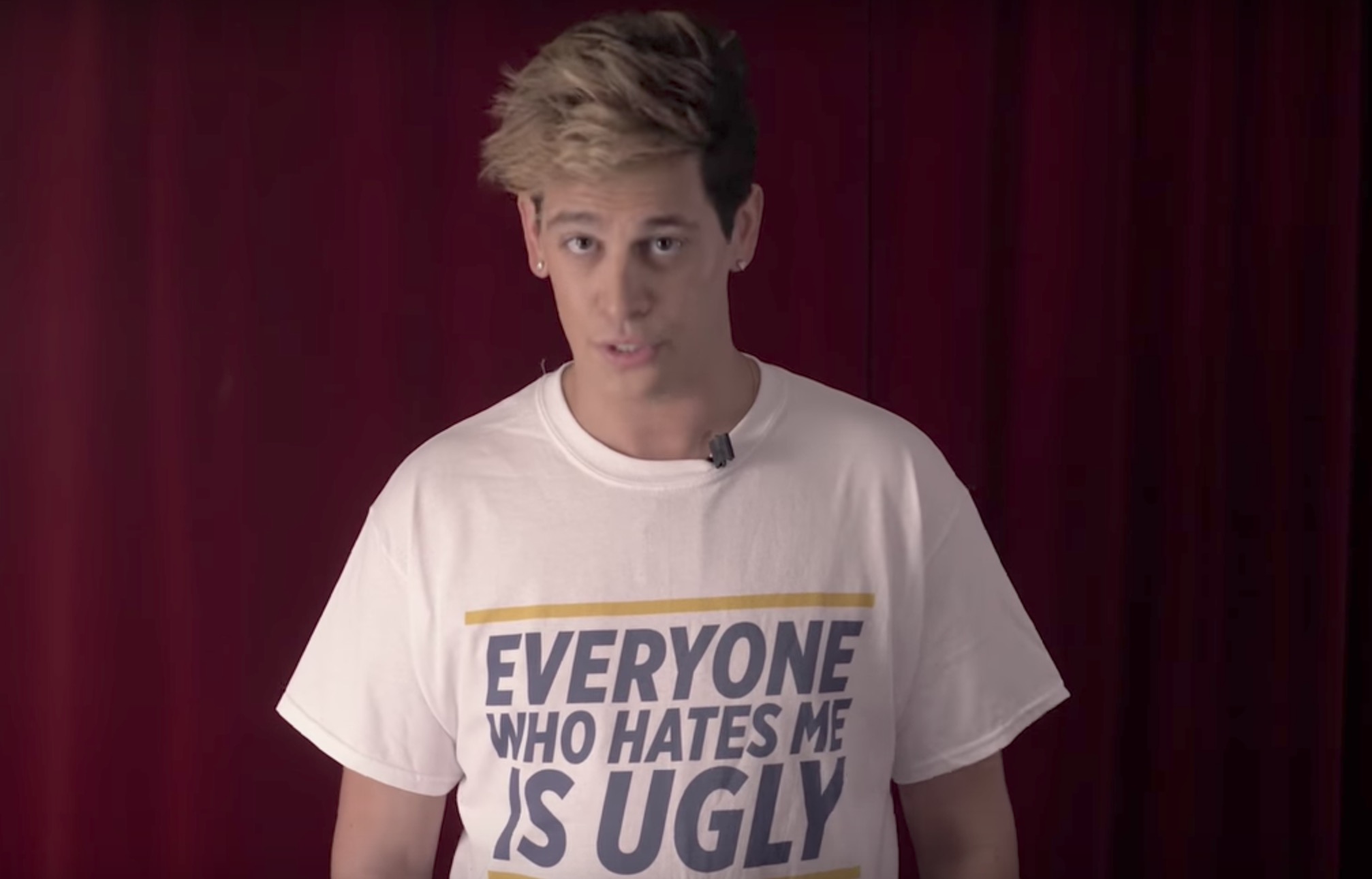 Free Speech Week, Milo Yiannopoulos’s four-day, right-wing extravaganza that was set to descend on University of California, Berkeley this weekend, is going to be cancelled.

That’s according to sources close to the event who told Mediaite Yiannopoulos will be holding a theatrical press conference on Saturday in which he intends to call it off — and blame UC-Berkeley for its ‘forced cancellation.’

Lucian Wintrich — Washington D.C. correspondent for far-right website Gateway Pundit, who had been involved in the planning of the highly publicized event but dropped out earlier this week — confirmed its cancellation in a video posted on Twitter late Thursday night.

“When I was first invited to Free Speech Week I saw it as an incredible opportunity,” Wintrich told Mediaite in a Thursday night phone call. “But then it was made clear to me this week that this event definitely wasn’t happening, and I had to drop out — I saw no reason to lie to the public and mislead people into thinking it was happening.”

Sources told Mediaite that Yiannopoulos knew as early as last week that the event was falling apart, but misled the media, UC-Berkeley and his fans — many of whom bought flights and accommodation for the week — by claiming it was still on.

Yiannopoulos, a former Breitbart writer, full-time provocateur and professional PR stuntman, has been planning ‘Free Speech Week’ since his February visit to UC-Berkeley, which was met with wild and violent protests replete with Molotov cocktails, flaming trees, and $100,000 worth of damage to the campus.

The initial lineup for Free Speech Week, scheduled for September 24-27th, was announced earlier this month to maximum fanfare: released just hours before Ben Shapiro planned to speak on UC-Berkeley’s campus, it promised a four-day bonanza of the most controversial right-wing pundits, speakers and internet stars. It was a list that seemed perfectly designed to attract maximum attention from the media and maximum outrage from UC-Berkeley’s student body.

But shortly after the announcement, things began to unravel. One dumbfounded speaker after another emerged to voice their surprise at their inclusion on the list, with many claiming to have never been contacted about the event.

Charles Murray, the expert in dubious academia whose planned appearance at Middlebury College in March was shut down by violent protests, called Milo a “despicable asshole” and said the inclusion of his name in the lineup was done without his “knowledge or permission.”

Commentator Heather Mac Donald was also surprised to find she was meant to speak at the event. As was the Google memo guy, Erik Prince (who told Mediaite his appearance on the lineup was an “error” and that he never planned on attending), and a litany of others. Ann Coulter never confirmed her attendance publicly, and neither did Steve Bannon, who is scheduled to appear at a political rally in St. Louis on Sunday.

Lisa DePasquale, a conservative commentator and former director of CPAC who plans to speak on Sunday, told Mediaite she thought the original lineup was a draft that had been accidentally published — explaining why so many of its speakers had not been informed of the event upon its release.

But the flight of speakers didn’t stop there: on Wednesday night, Wintrich announced he was withdrawing from the event, calling it “impractical.” On Twitter, he elaborated, writing that the “organizers and the school itself turned this into a shitshow.”

And that’s the other problem: The Berkeley Patriot, the student group that teamed up with Milo for the event, missed a bevy of deadlines to provide information to the university about the week and its speakers, a requirement to ensure adequate security at a campus that has had past problems with these sorts of events (see: the last time Coulter came to town).

On Monday, UC-Berkeley spokesman Dan Mogulof wrote a statement calling on the organizers to meet their obligations and provide the university with required information on the event. “The University cannot defend spending hundreds of thousands of dollars to provide security arrangements for events based on a schedule built on a long list of unconfirmed speakers and/or a news release issued by an external commercial enterprise,” he wrote.

But by Thursday night, only four speakers were confirmed with the University.

For their part, organizers accused UC-Berkeley of working to derail the event with arbitrary deadlines and requirements.

Yiannopoulos also released a statement on Monday — which many took as laying the groundwork for the event’s cancellation — in which he accused UC-Berkeley of attempting to shut down the week and slammed attempts “to use bureaucratic maneuvers and strategic media leaks to disrupt the event and dissuade headline speakers from attending.”

“That’s absolutely absurd,” Mogulof told Mediaite of accusations they are attempting to shut down the event. “We’re in the process of taking steps that will cost the University hundreds of thousands of dollars in security, and will likely end up being far in excess of a million dollars.”

“So to any suggestion that we are trying to stop the event from happening I would say: actions speak louder than words.”

And according to people involved in Free Speech Week that Mediaite spoke to, Yiannopoulos’s claims that the University is to blame for troubles with organization are unfounded, and strike more as a cover for the week’s likely cancellation.

One speaker — who was listed on the original lineup but will not be attending, and requested anonymity to speak freely — told Mediaite that the event’s organizers had sent forms to all the speakers that needed to be signed to confirm their attendance.

Many of those forms were returned to Yiannopoulos last week, according to the speaker, but he and the organizers never ended up sending them to UC-Berkeley faculty.

“Which is why the University now is confused about who’s confirmed and not confirmed,” the speaker said. “Because those forms were never actually sent in, at all.”

When asked whether it seemed like Yiannopoulos was planning on not going through with the event as early as last week, the speaker replied: “Yes, it certainly seemed that way.”

Mike Cernovich did not respond to requests for comment, but instead issued a series of tweets about the event Thursday night. He called it a “sincere effort” and dismissed the idea that Yiannopoulos didn’t want it to happen as a “conspiracy theory.”

Another speaker — who Yiannopoulos approached to appear at the event, and also spoke to Mediaite on condition of anonymity — said that while Yiannopoulos may have initially planned to go through with the week, “it feels like something happened at some point which made him realize that it was going to be very difficult to jump through all the hoops & he needed to plan for a ‘cancellation’ narrative.”

“I would be surprised, at this point, if it actually happened, at least as originally envisioned,” the speaker said of the event.

When told about the forms that Yiannopoulos and the organizers allegedly failed to return to UC-Berkeley, they said that they had no knowledge of such forms, but that if true, “it certainly seems that this was either a set up on his part, or that, at the very least, Milo saw the handwriting on the wall and tried to spin this into something positive for himself.”

Wintrich told Mediaite the decision to definitively cancel Free Speech Week was made in secret by Yiannopoulos’s team on Thursday — presumably once Milo realized not enough balaclava-clad anti-fascists would show up to rescue him from throwing the Fyre Festival of right-wing rallies.

Through it all, Milo still maintains that everything is on track. “It will proceed exactly as planned,” he said in a Thursday email. And while he confessed that psychologist Jordan Peterson would not be able to attend the event, he held that all the other headliners would show — including Bannon and Coulter, who are still listed as “confirmed speakers” on the event’s website.

In an Instagram post late Friday night, Yiannopoulos invited journalists to a press briefing set to be held in San Fransisco on Saturday.