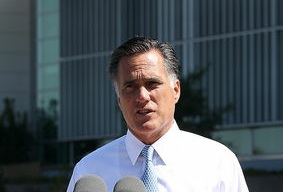 There’s this idea out there that calling Mitt Romney “weird” is some kind of coded attack on his religion, but sometimes, weird is just weird. Completely lost in Thursday’s Romney at Solyndra vs. Axelrod in Massachusetts political news cycle, along with Romney’s paranoid accusations toward President Obama, was his utterly bewildering assessment of “what’s happening in Syria” as a “ray of sunshine.”

Romney has taken a lot of criticism for his weak (to put it kindly) foreign policy chops, and his response to Syria has followed the familiar formula that whatever President Obama does is either wrong, right but not enough, or too little, too late. Anyone seeing the horrors coming out of Syria last weekend would, of course, want to go in and pluck every last one of those suffering folks to safety, but it’s obviously not that simple. Romney’s characteristically amorphous prescription calls for the US to pressure Russia, and to arm a disorganized and unknown insurgency.

There’s plenty of room for debate on foreign policy, although there is wisdom in Mitt Romney’s Bush-era assertion that “politics ends at the water’s edge,” at least where undermining your own government’s diplomatic position is concerned.

But Romney’s response at Thursday’s press conference wasn’t just lacking in concrete solutions to the difficult situation in Syria, it wasn’t just a chance to take cheap, hollow shots at his political opponent, it was just plain weird. He told reporters that “Syria, what’s happening in Syria, is a ray of sunshine.”

You can see that remark and the rest of his response below, and decide for yourself what the hell he was talking about. It wasn’t some simple misstatement, was it? Is there some word that you can replace “sunshine” with that makes it suddenly make sense?

It was Romney’s last question, so nobody got to ask him what he meant. The Romney campaign hasn’t responded to our request for a clarification as yet.

Here’s the clip of Romney’s remarks on Syria: