MSNBC’s Goldie Taylor Asks Tucker Carlson, Via Retweet, ‘Have You Ever Owned A Black?’

MSNBC’s Goldie Taylor Asks Tucker Carlson, Via Retweet, ‘Have You Ever Owned A Black?’ 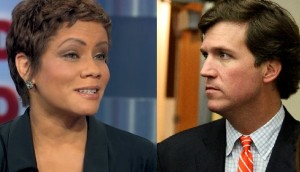 On the heels of Defense Secretary Leon Panetta‘s lift of the ban on women serving in combat, The Daily Caller publisher Tucker Carlson posted several regressive tweets lamenting the decision, alternately comparing voluntary military service with domestic violence and rape, and “congratulating” feminism for allowing women “the right to get your limbs blown off in war.”

MSNBC’s Goldie Taylor was not amused by Carlton’s retro-“edgy” musings, but she was amused with an Old Hoss Radbourn parody Twitter account, and retweeted this question to Carlson: “Your natty attire and insightful attitude towards women mark you as a man of my generation. Have you ever owned a black?”

Tucker Carlson was likely just trolling for reactions when he greeted the news of the Pentagon’s decision by tweeting “The administration boasts about sending women to the front lines on the same day Democrats push the Violence Against Women Act,” and following that up by tweeting “Feminism’s latest victory: the right to get your limbs blown off in war. Congratulations.”

Still, it’s worth noting that women serving voluntarily in combat, which they were already doing, is not exactly the same thing as being assaulted and/or raped, and although some women who serve do get their “limbs blown off,” they also contribute much more to our nation’s security than many of the pundits commenting on this ever will. MSNBC contributor Goldie Taylor quickly pointed out Carlson’s lack of standing to fire his piehole on the issue:

Then, Goldie hit him with the Old Hoss retweet, which she called “the delight of my life!”:

@TuckerCarlson Your natty attire and insightful attitude towards women mark you as a man of my generation. Have you ever owned a black?

Now, I know what you’re thinking. Old Hoss Radbourn was born in 1854, and wouldn’t have been old enough to own slaves, but that wasn’t really the point. Old Hoss was simply pointing out the absurd retrograde bigotry of Carlson’s tweets by placing them in their proper historical chronology.

This is the best part, though. Along comes Tucker fan-fish FishbowlDC to defend Carlson’s honor (via Wonkette):

Goldie Taylor, MSNBC contributor and self-described “social critic,” which just reeks of self-important bullshit, went off. She was very upset and tweeted, “Oh my goodness. Tucker Carlson, who never once considered enlisting, now chastising women who do… #MarinesDontWearBowties.” How she, who never served herself, knows whether Tucker ever thought of enlisting, seems based on the bowtie or the cha cha he once performed on “Dancing With the Stars.”

As it turns out, of course, Goldie is a former active-duty Marine, who not only “served herself,” but apparently just served Tucker Carlson and FishbowlDC, which later corrected the item. The Fishbowl item went on to slam Taylor for, as they put it, “charg(ing) racism at the drop of a hat.”

No one has accused Tucker Carlson of being a racist; catering to racists, maybe, but not of being one himself. The remark was simply an acknowledgement of what I believe is the broken Flux Capacitor that is Carlson’s ostensible attitude toward women.

I say “ostensible” because there’s every reason to believe that Carlson’s tweets were less-than-genuine, and simply designed to cause a poo-flinging riot among those who read his site. Tucker Carlson is supposed to be a libertarian, and there’s nothing remotely libertarian about a ban on women in combat.