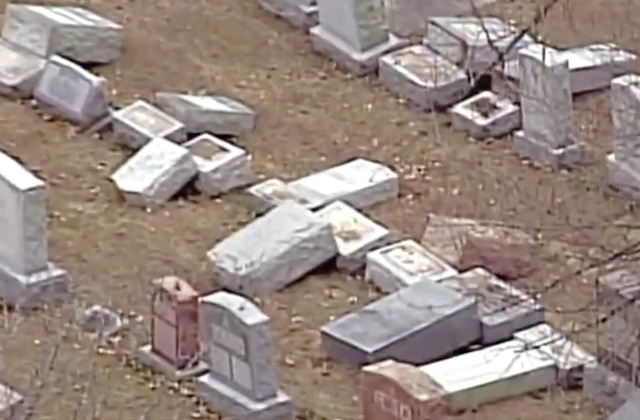 Monday’s discovery of extensive vandalism at a Jewish cemetery in Missouri came right in the middle of an increasing dialogue about the recent uptick in anti-Semitic rhetoric and crimes in the United States as well as where President Donald Trump and his administration fit in. Over 100 headstones at Chesed Shel Emeth cemetery were overturned and/or damaged by the vandalism, with many needing to be replaced outright.

On Tuesday afternoon, a crowdfunding page showed up to pay for the headstones from a familiar face: Muslim activist and Women’s March co-chair Linda Sarsour, working in conjunction with  Tarek El-Messidi of Celebrate Mercy as  The goal that she set was $20,000, and that was reached within a few hours. As of this writing, less than a day in, the total is over $77,000 and consistently climbing with every web page refresh.

Sarsour had been quick to condemn the incident on Twitter before starting the crowdfunding page 20 hours later:

This is horrible. What kind of sick human being do you have to be to do this?! https://t.co/YnQYJrlLaU

DONATE WHAT YOU CAN. Muslims Unite to Repair Jewish Cemetery! https://t.co/HVWIvpZtCR

“Every person deserves to rest in peace,” El-Messidi said in an interview with the New York Daily News. “No one wants to see the grave of their loved ones desecrated.” He also spoke to Haaretz, telling them that “You could say there is a silver lining in all the hate that is being directed against Jews and Muslims in America right now in that it has brought the two communities together, and this is just one example.” The Washington Post also quoted him as saying that “Politics can get in the way of our basic humanity; I hope this breaks through all those walls, no pun intended, to help bring us closer together.”

If the funds raised exceed what’s needed, the remainder will go to “other vandalized Jewish centers nationwide.”