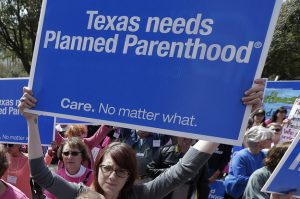 This week, the Texas state legislature voted on several bills to restrict abortion access. But no wonder you probably didn’t hear about this unless you live in Texas and read the Texas Tribune, since legislative attacks on the procedure are so commonplace in Texas that they stopped making national news forever ago.

Some were pretty run of the mill, like one bill, SB4, which will prohibit local and state government agencies from contracting with abortion providers and their affiliates.

According to the Tribune, state and federal law already prohibit tax dollars from paying for abortions, but SB 4 would “broaden that ban to include any financial contracts — such as lease agreements — with clinics that are affiliated with abortion providers but don’t actually perform abortions.”

If Texas conservatives want to take away funding from a facility that provides resources to prevent the need for abortions, they’ll have themselves to thank when abortion rates spike as a result.

But the bill that really caught my attention was one that will require women to pay a separate premium on their health insurance if they want their insurance to cover abortion. On the surface, this might also sound like a pretty typical demand of conservatives who are determined to make abortion as economically inaccessible as possible, but some Democratic lawmakers in the state pointed out how the policy suggests that women plan to have their abortions ahead of time.

We’ve all heard this implication before — that abortion isn’t a life-saving procedure, that it’s something women want like candy or a new purse, that they’re literally impregnating themselves intentionally for the sake of having the procedure. It’s the most common narrative about abortion in conservative media which just can’t seem to accept that different women have different health needs, economic situations, or different plans. And they have the fundamental right to make decisions about their bodies without being called murderers or being shamed and restricted by the state.

State Sen. Sylvia Garcia, a Democrat representing Houston, additionally pointed out the awful message the bill sends to sexual assault survivors. “Nobody plans for an abortion, but we surely darn well know that it’s not a woman who is pregnant after a case of incest or sexual assault,” Garcia said.

Women aren’t “planning” to have their abortions — it’s called an unintended pregnancy for a reason. If we’re shifting the dialogue to one of responsibility, then lawmakers ought to take some responsibility for why people aren’t receiving sexual health education in schools or at family planning centers, why reliable contraception isn’t more readily available to Texans. Pushing false narratives about women isn’t going to help anyone.