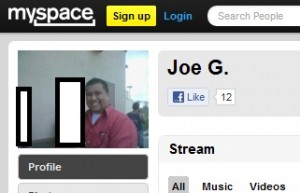 The Miami Herald has uncovered an old MySpace page belonging to George Zimmerman, the man charged with the murder of 17 year-old Trayvon Martin, for which Zimmerman claims self-defense. The page, which Zimmerman’s attorney confirms is authentic, contains comments sure to delight Zimmerman’s detractors, including several disparaging comments about “Mexicans,” and a reference to his “ex-hoe.”

What will really be interesting is to see how the conservative outlets who pounced all over Trayvon Martin’s social media accounts will handle this.

The long, rambling “About me” section of Zimmerman’s MySpace profile has a decidedly “thug life” ethos to it, particularly when Zimmerman praises his “boys” because they “do a year and dont ever open thier mouth to get my ass pinched,” which means that his friends served prison time rather than implicate him in a crime in exchange for a reduced sentence. This complicates things for conservatives who have made Zimmerman a cause celebre while going after Trayvon Martin for wearing a fake grill and kicking some slang on Twitter. While The Daily Caller happily looted Trayvon Martin’s Twitter account at the behest of an undisclosed source, they have yet to report on Zimmerman’s damning MySpace page (The DC did break news of a different Zimmerman MySpace page last month).

Also complicating the pro-Zimmerman forces’ argument that race couldn’t have been a factor in the shooting because Zimmerman is, himself, of “Latino / Hispanic” ethnicity, are these comments from that profile:

I dont miss driving around scared to hit mexicans walkin on the side of the street, soft ass wanna be thugs messin with peoples cars when they aint around (what are you provin, that you can dent a car when no ones watchin) dont make you a man in my book. Workin 96 hours to get a decent pay check, gettin knifes pulled on you by every mexican you run into!

Unlike anything found in Trayvon Martin’s social media history, this passage actually has some relevance to the case, as it demonstrates that George Zimmerman was not only capable of racial profiling, he engaged in it with members of his own ethnicity.

Zimmerman also brags, on his blog, about beating criminal charges:

He also talks about prevailing against his “ex-hoe” in court:

Out come of first case……
Im still free! The ex hoe tried her hardest, but the judge saw through it! Big Mike, reppin the Dverse security makin me look a million bucks, broke her down! Thanks to everyone for checkin up on me! Stay tuned for the A.T.F. charges……

What Zimmerman’s MySpace page also shows is that social media accounts aren’t always the best measure of a complete human being, as I’m fairly certain Zimmerman didn’t walk around the offices of Digital Risk showing off his gangsta affectations, bragging about his “boys” doing a year for him. While people generally try to put their best foot forward in life, they often change shoes to fit the setting.