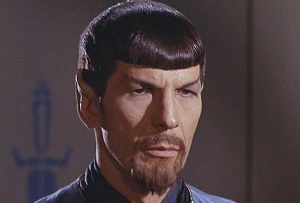 Earlier this week, the website RealClearPolitics.com reported that President Obama will be moving to a “replica” of the Oval Office for the duration of a two-year renovation of the West Wing. At Wednesday’s White House daily briefing, however, the one and only (we think?) Press Secretary Jay Carney threw cold water all over the prospect of an alternate White House, wherein President Obama has a sinister beard and makes people disappear with a single button-push on his Tantalus Field console. Instead, the President will continue to live long and prosper in the real Oval Office, even if there are renovations.

Carney was asked about the Faux-val Office during Monday’s Air Force One gaggle, but referred reporters to the General Services Administration. On Wednesday, however, Carney was pressed again, in lieu of the unresponsive GSA. From Wednesday’s daily briefing: (transcript via email from The White House)

Q Just one other question here. A few days ago you were asked about the —

MR. CARNEY: You’re not going to throw my words back on me?

Q — remodeling of the West Wing and temporary quarters for the President. You referred us to GSA. They have been completely uncommunicative on the issue. Do you have anything more on it? And should we expect something from them?

MR. CARNEY: Well, let me just say that as a rule with renovations and things like that and just work being done on this complex, we do refer reporters to the GSA. That’s their —

MR. CARNEY: But I can say specifically there — the reports about a replica Oval Office are false, and no one is moving from the West Wing. Certainly, no decisions about that have been made and not in any timeframe that —

Q You’re saying that no one is moving from the West Wing, you mean including the President?

MR. CARNEY: Including the President.

Q Even though renovations may be made?

MR. CARNEY: Well, again, I don’t have — for what kinds of renovations — I mean, you guys have looked around and seen that there’s constant work being undertaken here on the overall campus, but I don’t have anything specific. But because this issue, because of the description of an alleged replica Oval Office was reported out, I can tell you that that is false.

Q Temporary office quarters for him?

MR. CARNEY: Again, I just don’t have any more information for you. It’s not something that’s on my radar. I would refer you for more details to the GSA.

Q That hasn’t worked. Perhaps you could ask them to help us out?

MR. CARNEY: I will — I’m sure they know now, because they’re probably watching, that this has come up. (Laughter.)

The past several years have seen extensive work done to the White House grounds, work which required the construction of a press riser and the rerouting of reporters to the briefing room, and an inconsistently-enforced ban on photographs of the big dig. Reporters looking for a little payback may be disappointed to learn that they, it seems, will be the only ones to have been inconvenienced by White House renovations.