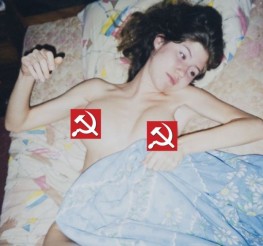 ‘Sexy Russian Spy’ Anna Chapman was apparently really good at pretending to be American…she sought out her 15 minutes in a New York Entrepreneur Week and now apparently there are naked pictures making the rounds courtesy of Chapman’s ex-husband. Really, what could be more American than that.

This from the ever-reliable News of the World:

[ Brit ex-husband Alex Chapman] tells how James Bond-loving temptress Anna had a 007-style mile high romp on a plane from London to the Russian capital as their passion reached its height.

And how the 28-year-old femme fatale loved to wear nipple clamps and wield a WHIP like an interrogator as they were Ivan it off.

“I found her Russian accent such a turn-on,” says Alex, 30, who had no idea she was honing her sexy spying skills on him. “She was the most beautiful person I had ever met, with an extraordinary body, and I was infatuated with her.

And this from the slightly (just) more reliable Daily Mail: Apparently Chapman (the husband) was questioned by MI5 last week about his wife’s relationship “with multi-millionaire Ken Sharpe for three years at a British registered company based in the London flat she shared with her then husband, Alex.”

During her time with the company, Southern Union, 28-year-old Ms Chapman moved millions of pounds between Zimbabwe and the UK, raising questions over whether the cash may have been laundered for the purposes of espionage.

More on that part of the story here. And if you want to read the really kinky parts (and see the kinky pictures!) from NOTW go here.