The National Republican Senatorial Committee was forced to apologize Tuesday after a junior staffer sent out a link to a image of Kentucky Democrat Alison Lundergan Grimes’ face photo-shopped onto a scantily-clad woman’s body. “Is Alison Grimes The New ‘Obama Girl’?” the now-deleted tweet asked the account’s 55,000 followers:

The link took followers to a page on the political blog Bluegrass Bulletin, which discussed a recent appearance Grimes made with First Lady Michelle Obama at a New York fundraiser along with the photo below of Grimes’ face on the body of “Obama Girl” Amber Lee Ettinger: 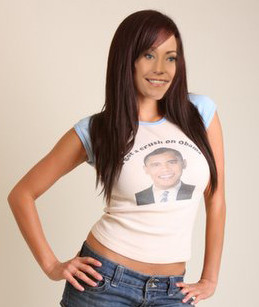 A spokesperson for the NRSC said it was a “mistake” to post the link on the organization’s Twitter account. “We agree, it’s extremely offensive. It was a mistake made by a junior staffer and disciplinary action has been taken,” she said in a statement. “We took corrective action as soon as it was brought to our attention and have taken steps to ensure it will never happen again.”

The author of the blog post also decided to remove the photo from Bluegrass Bulletin, noting:

“A satirical photoshop image of Alison Lundergan Grimes as the famous Obama Girl’ which appeared here this morning has apparently caused quite a stir. It was intended to be a humorous punctuation mark to ALG being an intended beneficiary of Michele Obama’s fundraising at a Washington DSCC event. I have removed it from this post voluntarily.”

Grimes, who is polling closely with incumbent Republican Senate Minority Leader Mitch McConnell released a statement of her own, denouncing the GOP’s “pattern” of sexism:

“The NRSC should stand for Notoriously Repeating Sexist Comments – they cannot relate or connect with the women of Kentucky or our country. The incredibly inappropriate comments from Senator McConnell’s team mark a developing pattern and demonstrate just how out of touch McConnell is with the women of Kentucky. As I have said, I am proud to wear a dress, and as Kentucky’s more than two million women know, it is not what is in the dress that matters. It is what is in the head and I will stack my head up against Senator McConnell’s any day.”