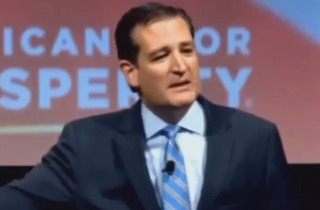 Senator Ted Cruz took a brief swipe at the Bronx during a speech he gave on Saturday. As a result, some New York Democrats fired back at Cruz for what they deemed a cheap shot about stereotypes in the Bronx.

Cruz gave a speech to Americans for Prosperity and touched on the subject of immigration, saying, “Now, I understand that Manhattan is very concerned with their security with the Bronx, but it’s a little bit different on 2,000 miles of the Rio Grande.”

She also trashed Cruz on Twitter, and was joined by Bronx Borough President Ruben Diaz, Jr.:

.@tedcruz clearly has no idea what the #Bronx is really about! Let him know how outdated/disgusting his ideas are! http://t.co/JBwDjC7oYP

And House Democrat José Serrano, who represents a district that contains part of the South Bronx area, issued a blistering statement on Cruz’s remarks:

Senator Ted Cruz’s pandering at the expense of the good people of the Bronx, continues to show just how much the darling of the Tea Party is out of touch with real life in our country. Instead of getting his republican colleagues to work on passing Immigration Reform, he attacks hard working people in the Bronx as part of his pathetic approach to deal with the immigration issue. Your comments about Manhattan’s concern about their security in relationship to the Bronx, Senator Cruz, is a cheap shot meant to divert attention away from your failed leadership on this issue. Manhattan has nothing to fear from the Bronx but our country should fear your extreme and divisive philosophy.

You can watch CBS 2’s report below: