Obama to Scott Walker: ‘Bone Up’ on Your Foreign Policy
VIDEO

Obama to Scott Walker: ‘Bone Up’ on Your Foreign Policy 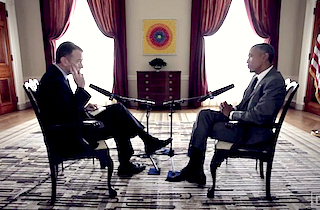 In an NPR interview released Tuesday morning, President Barack Obama told Wisconsin Governor and probably 2016 contender Scott Walker (R) to chill on the grand foreign policy statements until he’d had a chance to study up.

Walker has been criticized as a foreign policy neophyte, especially after he called Ronald Reagan’s destruction of the Air Traffic Controller’s Union “the most significant foreign policy decision” of his lifetime. He has threatened to nix any Iran nuclear deal Obama negotiated, regardless of the desires of U.S. allies.

“If that starts being questioned, that’s going to be a problem for our friends and that’s going to embolden our enemies,” he continued. “It would be a foolish approach to take. And perhaps Mr. Walker, after he has taken some time to bone up on foreign policy, will feel the same way.”

This is the second time in a month Obama has gone after Walker specifically; last month he criticized the governor over the passage of a so-called “right to work” bill in Wisconsin.

Watch the clip below, via NPR: