One Week After Her Speech, NY Times Reports On Sarah Palin’s Iconoclastic Ideas 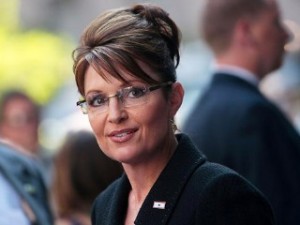 We talked a lot about Sarah Palin‘s trip to Iowa, but then it came and went and she ran a half-marathon but didn’t really say anything outrageous or announce a presidential run and so we all just sort of moved on. Today, almost a week later, the New York Times wonders if maybe we missed something. Taking a more careful look her Indianola address to the Tea Party they find that, actually, she might have had some interesting things to say.

“There was plenty of the usual Palin schtick,” writes Anand Giridharadas, “But when her throat was cleared at last, Ms. Palin had something considerably more substantive to say.”

According to Giridharadas, Palin’s address emphasized three points, all of which took issue with both sides of the current political divide:

“First, that the United States is now governed by a “permanent political class,” drawn from both parties, that is increasingly cut off from the concerns of regular people. Second, that these Republicans and Democrats have allied with big business to mutual advantage to create what she called “corporate crony capitalism.” Third, that the real political divide in the United States may no longer be between friends and foes of Big Government, but between friends and foes of vast, remote, unaccountable institutions (both public and private).”

She said things about free markets and capitalism that Republicans might hate, and things that “liberals might like, if not for Ms. Palin’s having said them.” Perhaps too eager for a will-she-won’t she, or for a funny sound-bite or at least a good “You betcha,” we missed what might be sign of an interesting and complex politic.

It’s unfair to suggest that this is the first time Sarah Palin has showed signs of actual ideas, and it is definitely not the first time it’s been suggested that Sarah Palin’s politics might fall somewhere outside the traditional platforms of either party — she is the “rogue” candidate, after all. What’s interesting about Giridharadas story is the reminder it serves as to how easy it is to get caught up in a media narrative.

To begin, he confesses “that, if Sarah Palin surfaced to say something intelligent and wise and fresh about the present American condition, many of us would fail to hear it.” Why is that? Because, “That is not how we’re primed to see Ms. Palin.” In this case, Giridharadas was caught off guard by the things he heard, but only because he stopped to listen for something he didn’t already know.

“Too primed,” it took a week to get to this point. That delay was not a result of the media was ignoring her, like she might wish to say, it was just that they thought they already knew. Does sound sort of “Lamestream.” The first step to recovery, however, is admitting you have a problem. Giridharadas confession is a brave start.