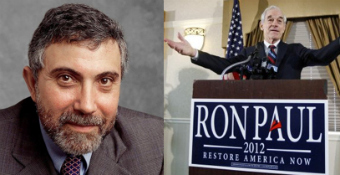 As you may recall, Monday afternoon on Bloomberg TV’s Street Smart, New York Times columnist Paul Krugman got into a heated debate with Congressman Ron Paul. This morning, after he presumably received a great deal of criticism from Paul fans and/or read the general web buzz that declared Paul the victor, Krugman took to his blog to insult the congressman and his fans:

…[P]eople react based on their prejudices. If Ron Paul got on TV and said “Gah gah goo goo debasement! theft!” — which is a rough summary of what he actually did say — his supporters would say that he won the debate hands down; I don’t think my supporters are quite the same, but opinons may differ.

What pomposity. Mr. Krugman’s fans couldn’t possibly be as voracious as Paul’s because Krugman’s are high-minded New York Times subscribers.

Of course opinions will differ. Krugman’s followers can often be just as sycophantic. You have to be sorely out-of-touch to assume that your followers could never be fanatical like some of Ron Paul’s admirers.

But what’s even more unnerving about Krugman’s post is the way he describes Paul’s rhetoric as “Gah gah goo goo debasement! theft!” This is how I imagine Nobel laureate Krugman hears all of his opponents. Dr. Paul, willing to engage a well-known popular economist, brings up serious points about monetary policy (points that have long been made by Nobel laureates like F.A. Hayek and Milton Friedman), and Krugman behaves like the child with his fingers in his ears: “Nah, nah, nah, I can’t hear you!”

Krugman, nose firmly pointing upward, describes his debate with Paul as “the perfect illustration of a point I’ve thought about a lot, the uselessness of face-to-face debates.” But contrary to what Krugman may think, the general consensus about the “Paul vs Paul” segment was that it was a truly thoughtful discussion, a refreshing break from the usual talking-heads banter.

Think about it: you approach what is, in the end, a somewhat technical subject in a format in which no data can be presented, in which there’s no opportunity to check facts (everything Paul said about growth after World War II was wrong, but who will ever call him on it?).

No one will call Dr. Paul on it, because he was right about spending cuts after World War II. From 1944 through 1948, the federal government cut spending by roughly 75%. I don’t know how that could be at all ambiguous to Mr. Krugman.

But it seems as though Mr. Krugman feels he is above the shallow art of talking-head debates, and we should all be thankful he came down to our level for roughly 13 minutes of what us little people considered “thoughtful television.”

So if he has such disdain for the process, why did he bother participating?

So why did I do it? Because I’m trying to publicize my book, which does have lots of data and facts…