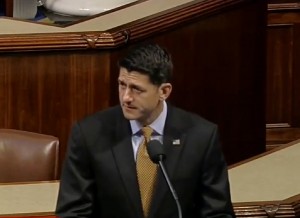 House Speaker Paul Ryan lamented a week of “terrible, senseless” gun violence and sought to elevate the “values that brought those protesters to the streets in Dallas,” which he described as “respect, decency, compassion, humanity.”

“A few perpetrators of evil do not speak for us. They do not control us,” he said. “The blame lies with the people who committed these vicious acts and no one else. And as the President rightfully said, justice will be done. We also need to let the healing be done as well.”

He continued, “This has been a long week for our country. It’s been a long month for America. We’ve seen terrible, terrible senseless things. Every member of this body, every Republican and every Democrat wants to see less gun violence. Every member of this body wants a world in which people feel safe regardless of the color of their skin, and that’s not how people are feeling these days.”

“We need to take a moment here, for reflection, for thought, for prayer, for justice, for action,” he concluded. “Right now let’s let justice be done and let’s also let some healing occur too.”