Report: Trump Cutting Back on TV Interviews in Effort to Avoid ‘Mistakes’ and ‘Minor Controversies’

Report: Trump Cutting Back on TV Interviews in Effort to Avoid ‘Mistakes’ and ‘Minor Controversies’ 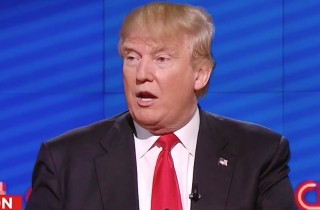 A report on Donald Trump‘s campaign suggests that his advisors are now trying to limit his TV appearances in order to reduce the amount of controversy he generates with his inflammatory political ideas.

Howard Kurtz of Fox’s Mediabuzz reported today that some of the mogul’s top people are trying to cut down on the media blitz tactics that some say were instrumental in his political rise. The report noted that the great majority of Trump’s recent interviews have gone to Fox, and also that there are new efforts in place to keep Trump on “friendlier terrain,” controlling his interviews, and restricting who gets to talk with him.

Trump, who has resumed his full-throated denunciations of the media—such as calling CNN the Clinton News Network—personally vetted every TV invitation for most of the campaign. Now the staff is weeding out many requests without consulting him, the sources say, which could either be viewed as a mark of professionalization or an attempt to restrain Trump from being Trump.

Sources indicate that the campaign’s new direction comes from the guidance of Paul Manafort and Jared Kushner. Their goal appears to be keeping Trump attached to hospitable shows like Fox & Friends, Hannity, and The O’Reilly Factor.

Kurtz’s report went on to note the current friction that exists between Trump and CNN and MSNBC, as well as the presumptive nominee’s proclivity for giving his interviews by phone instead of in person. Some advisors behind the move reportedly say that it is up to Trump to expand his base, and that he should allow his spokespeople to spar with the media on his behalf when it comes to controversial matters like invoking the Star of David in an attack on Hillary Clinton.