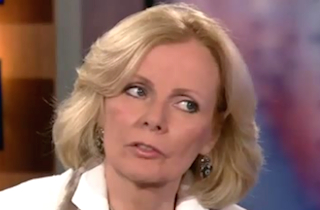 Wall Street Journal columnist and President Obama‘s most condescending critic Peggy Noonan thinks it would be nice if the president showed some humility should Democrats suffer big electoral loses on Tuesday.

In a blog post at the Journal, Noonan says unlike presidents Bill Clinton and George W. Bush before him, Obama hasn’t accepted political defeats (as in the 2010 midterms) with tact.

She compares Bush’s 2006 midterm losses to Obama’s. “[I]n his (Bush’s) news conference you hear the sound of an old graciousness that has eluded President Obama, who has long said there’s little he can do with obstructionists in Congress who are stuck on hating him,” Noonan says.

For those who think Mr. Obama has faced unusual levels of rhetoric, consider this question from a reporter to Mr. Bush:

“Thank you, Mr. President. With all due respect, Nancy Pelosi has called you incompetent, a liar, the emperor with no clothes and, as recently as yesterday, dangerous. How will you work with someone who has such little respect for your leadership and who is third in line to the presidency?”

This is how Mr. Bush replied. “I’ve been around politics a long time. I understand when campaigns end and I know when governing begins. And I’m going to work with people of both parties. You know, look, people say unfortunate things at times. But if you hold grudges in this line of work, you’re never going to get anything done. And my intention is to get some things done, and soon—we’re start visiting with her Friday with the idea of coming together.”

That is the sound of political graciousness. It would be nice to hear it from Mr. Obama on Wednesday.

For the sake of balance, Noonan throws in that she hopes Republicans won’t gloat if they see big gains. But she doesn’t name any names.