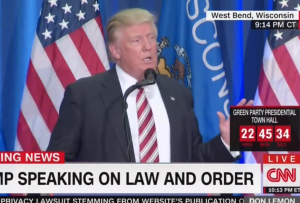 As he spoke in Wisconsin tonight, GOP presidential nominee Donald Trump made an appeal to voters of color. As there has been rioting in Milwaukee following the police shooting of a young black man and Trump is currently polling at 1% among African Americans, the topic seems timely enough.

Are people of color into the speech?

Donald Trump is getting African American outreach wrong in the exact way that the GOP has been getting it wrong for my entire life.

Among other things, Trump has spoken all kinds of craziness about President Obama. Why would black folks vote for such a man? #XanaxTrump

Trump went to Wisconsin to woo the 1% of black voters that support him, which is weird because that 1% already works on his campaign.

The only black people I’ve seen here in the last four and a half hours are employees of the venue. https://t.co/407vZJCT7w

Is anyone of any color into it?

Trump speaking *as if* he is appealing directly to black voters – note that campaign chose West Bend for this address, which is 95% white.

Why isn’t Trump making this speech in the black areas of Milwaukee? Oh right: gutless.

I’m trying to imagine the conversation at Trump HQ.

“We need to make a pitch to black voters.”

“Let’s do that in a nearly all-white town.”

Is Trump… trying to pretend … that he cares about black people? Holy crap. This speech needs a laugh track.

Trump: Immigrants will “take all the jobs, including from low-income African Americans.”

He doesn’t even know he’s being racist.

Great Trump speech. Imagine how much better off Black Americans would be today, if Dems hadn’t decided to dump 30 million 3d worlders on US

Who knows what future polls will reveal about how the speech went over, though?