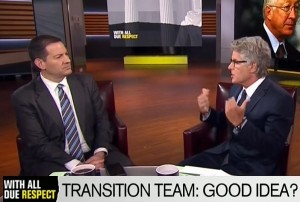 For some strange and completely unknowable reason, Morning Joe regular and With All Due Respect fill-in host Donnie Deutsch seems to be applying wildly different standards to presidential nominees Donald Trump and Hillary Clinton. Both he and regular WADR host Mark Halperin reacted to the news that Hillary Clinton has named former Secretary of the Interior Ken Salazar to head her presidential transition team by wondering if this was a smart move politically, with Deutsch deciding it leaned more toward “arrogance” than “assumptiveness”:

I think this is a terrible mistake. It’s one thing to act like a winner. It’s another thing to start declaring victory. One of the things that hurt Hillary at the beginning of the election was the “We are not going to coronate her,” that propped Bernie up. There is a difference between assumptiveness and arrogance. It’s a little early in the campaign, you’re signaling to people, I’m telling you how this is going to end versus you telling me how this is going to end. There’s a difference, once again, versus trying to get ducks in order. This just did not feel right to me.

Halperin, for his part, at least had the sense to deign that this announcement was beneficial in ways that “trumped” Deutsch’s concern, although they both agreed it amounts to a declaration of victory. Great point, brah and fill-in brah, except Donald Trump announced his transition team more than three months ago. If Hillary is arrogant, then Trump must consist of pure arrogance plasma, unable to take human form or to be viewed except by using a pinhole reflector.

What, you might ask, was the reaction on WADR when Trump announced Chris Christie would head his transition team back in May? Glad you asked:

Who can say why these two very different standards are being applied, but it’s good to know that Hillary Clinton always has friends at MSNBC to let her know when she’s horribly botching things.