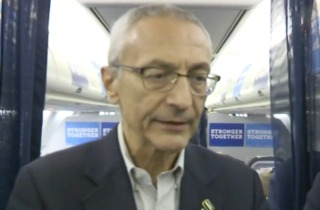 Clinton campaign chairman John Podesta addressed his hacked emails on Tuesday by suggesting that WikiLeaks is collaborating with Donald Trump in order to damage Hillary Clinton.

As the transparency organization continues to publish hacked content from Podesta’s account, investigators have suggested that they were uncovered as part of a Russian cyberattack on American officials. Some of Clinton’s campaign staff have accused WikiLeaks of being pro-Trump, and last night, Podesta joined in by noting how Trump adviser Roger Stone frequently claims to be in touch with Julian Assange.

“I’ve been involved in politics for nearly five decades, and this definitely is the first campaign that I’ve been involved with in which I’ve had to tangle with Russian intelligence agencies, who seem to be doing everything they can on behalf of our opponent…I think it’s a reasonable assumption, or at least a reasonable conclusion, that Mr. Stone had advanced warning and the Trump campaign had advanced warning about what Assange was going to do.”

On August 21st, Stone took to Twitter to suggest that Podesta would be a target of some kind.

Trust me, it will soon the Podesta’s time in the barrel. #CrookedHillary

The leaked emails have uncovered peculiar bits of information, some of which Trump has incorporated into his recent campaigning. Stone remains one of Trump’s top men, and he has repeatedly promised in recent weeks that WikiLeaks would soon produce new information that could cripple the Clinton campaign.

When asked how he felt about the public scrutiny of his emails, Podesta said it “doesn’t feel great,” but “I’m kind of zen about it at this stage.”