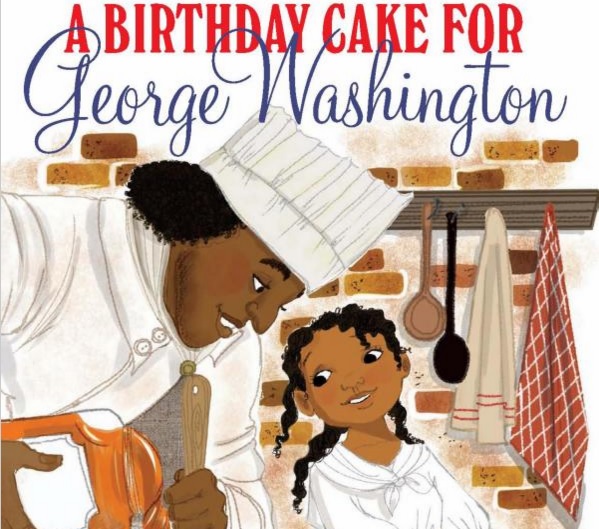 There is a weird sub-genre of racism in which folks try to evince concerned-face acknowledgement that slavery was bad, but also that it wasn’t that bad, not for all of the slaves. It’s even got it’s own strange language, like the official Mount Vernon website’s continual references to George Washington‘s slaves as members of the “Mount Vernon enslaved community,” which sounds more like a nice co-op board than anything else.

You can add A Birthday Cake for George Washington, a children’s book depicting the story of Washington’s slave chef Hercules, to that sub-genre. It tells the story of the ultimate White People Problem: Washington needs his slaves to bake him a birthday cake, but horrifyingly, they run out of sugar. How will they overcome? Zany hijinks ensue, and (spoiler alert!) they find the sugar, bake the cake, and happily wish their master “Happy Birthday!”

The book immediately sparked outrage over it’s depiction of shiny, happy slavery, and so the book’s publisher, Scholastic, immediately pulled it from circulation. Kidding! Have you met white people? They first tried a whitesplaining statement that was in no way doomed to failure, pointing outraged readers to the author’s defense. Ramin Ganeshram writes that her desire not to “erase” Hercules’ story necessitated defying the narrative that no slaves were happy:

It is the historical record — not my opinion — that shows that enslaved people who received “status” positions were proud of these positions — and made use of the “perks” of those positions. It is what illustrator Vanessa Brantley-Newton calls out in her artist’s note as informing her decision to depict those in A Birthday Cake For George Washington as happy and prideful people.

In a modern sense, many of us don’t like to consider this, fearing that if we deviate from the narrative of constant-cruelty we diminish the horror of slavery. But if we chose to only focus on those who fit that singular viewpoint, we run the risk of erasing those, like Chef Hercules, who were remarkable, talented, and resourceful enough to use any and every skill to their own advantage.

That’s weird, though, because Hercules escaped in 1797, and left a six year-old daughter behind in Mount Vernon. Weirder still, Ganeshram “erased” that from her story. In fact, white denial about slavery is so strong that the Mount Vernon website, to this day, says that Hercules escaped because he loved Philadelphia so much. And this was pre-cheesesteak, keep in mind.

Given a few more days to think about it, Scholastic decided to withdraw the book because it “may give a false impression of the reality of the lives of slaves.”

Slow clap for you, Scholastic. I know it’s hard to portray slavery in children’s books because we’d all like our children to be able to sleep again, but it’s also important for grown people to internalize the realities of slavery, even as it relates to an American hero like George Washington. Yes, he’s the father of our country, but he also really went out of his way to keep his slaves enslaved:

Ten years before Washington brought Hercules to Philadelphia, the Pennsylvania legislature passed the Gradual Abolition Act, a law that allowed all slaves owned by Pennsylvania residents the ability to free themselves after six months of living in the state. Members of Congress were exempt, but the law made no mention of members of the Executive or Judicial branches of government, which wouldn’t be created until 1788.

When George Washington became a Pennsylvania resident, he was confronted by a legal imperative to free his slaves. Technically speaking, he had to free them all after six months of labor in Philadelphia, but of course, he wasn’t keen on letting them go.

After making a weak argument that he wasn’t a real Philly resident because his job necessitated his living there, Washington gave up on trying to wriggle out of his legal obligation and broke the law to keep Hercules and Delia enslaved.

Under the council of attorney general Edmund Randolph, Washington would periodically ship slaves back to his plantation in Virginia in order to technically “renew” their Pennsylvania residencies.

No matter how good you think Hercules, or any other slave, had it, the fact is that their lives were not only stolen, they were constantly forfeit, constantly under threat of terror. Lots of white people don’t like to think about that, and so you get people trying to give Washington credit for not whipping his slaves all that much, or for eventually freeing them after spending years circumventing the laws to keep them enslaved. Here’s something else that got erased from the birthday cake story, from the official Mount Vernon website:

Washington’s last will and testament, written in July 1799 before his death that December, provided for the eventual emancipation, care, and education of his slaves, following the death of Martha Washington. However, he had no legal control over whether the Custis family dower slaves would gain their freedom. As a result, Hercules’ wife and children remained enslaved, even after Martha Washington’s death in May 1802.