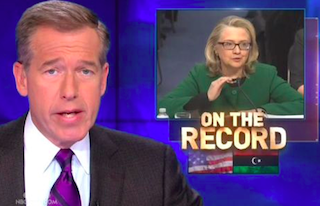 In the days since Brian Williams first recanted his story about getting shot at by RPG fire while flying in a helicopter over Iraq, maybe commentators have drawn parallels to Hillary Clinton’s 2008 campaign story about coming under sniper fire during a visit Bosnia in 1996, which was later proven to be untrue. Now, RNC chair Reince Priebus is using the Williams story to highlight that Clinton episode in a deliberately-provocative letter to DNC chair Debbie Wasserman Schultz.

In the letter, obtained “exclusively” by Breitbart, Priebus asks Wasserman Schultz if the Democratic Party has “suspended” Clinton in the same way NBC News has put Williams on an extended hiatus as Nightly News anchor.

Read the full text of the letter below:

As you have undoubtedly noticed, Hillary Clinton, your presumptive 2016 nominee and President Obama’s heir apparent, has been hiding from the public. We at the RNC, like many Americans, have been wondering why.

After hearing about Brian Williams’s recent suspension at NBC for telling false stories about coming under fire in war zones, we thought perhaps the DNC had also “suspended” Mrs. Clinton for her similar fabrications.

As you remember, she once told a harrowing tale of “landing under sniper fire” in Bosnia, only to have her story completely debunked when a video showed her walking casually on the tarmac.

So, have you given Mrs. Clinton the Brian Williams treatment? Is that why she’s gone missing?

If that’s not the case, do you rebuke her fabrications in the same way that NBC has rebuked their star news anchor? Will the DNC conduct research into Mrs. Clinton’s other past statement to ensure that she is being honest with the American people? If not, I’m sure we can help with that.

Priebus and the GOP have been promoting a #HillarysHiding hashtag on Twitter recently, criticizing the former secretary of state for not actively campaigning for president before she made an official announcement: