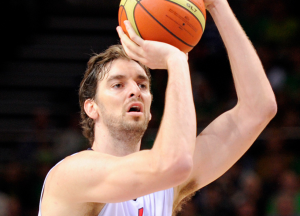 More than 10,500 world class athletes are expected to hit the shores of Brazil in August for the 2016 Rio Summer Olympics, but this year’s games are quite unlike any other we’ve seen in recent memory.

Where the storylines would otherwise solely be focused on the competitions and the medal count and the expectations of athletic prowess, the 2016 games are marred in vile controversy. Aside from the crippling economic woes of the host country — not to mention the suspension and impending impeachment of their President — Brazil is facing backlash from the world health community over concerns for the Zika virus. Although the World Health Organization has officially stated that, “…there is no public health justification for postponing or cancelling the games,” many people aren’t so sure.

That includes NBA star and Chicago Bulls forward Pau Gasol, who is set to represent his native Spain in the 2016 games. Now, the possibility of Gasol playing in his third Olympics (he won the silver medal in both 2008 and 2012) is at risk, as he has now stated his concerns with traveling to Rio.

“We need to understand the seriousness of the situation,” said the baketball player, who was a one-time medical student prior to his playing career. He continued, “Even though there are some soothing words being said, we know that there are different opinions about the subject.”

“It wouldn’t surprise me to see some athletes deciding not to participate in the games to avoid putting their health and the health of their families at risk. I’m thinking about [whether to go]. Just like every athlete, or any other person considering going to Rio, should be thinking about it… Some of these athletes [I spoke to] are planning to have children in the near future and this could affect them, it could affect the health of their kids and their wives. Their health should come first.”

The Zika virus can cause serious birth defects in babies born to infected mothers, and athletes looking to start a family are now reconsidering the risks involved with the Olympics. This includes another high-profile athlete — golf’s fan-favorite Rory McIlroy — who also voiced concerns just last week over competing in the Rio games this summer. As one of the most recognizable and respected faces in the world of golf, McIlroy said to the BBC last week, “There’s going to be a point in the next couple of years where we [McIlroy and his fiancée, Erica Stoll] are going to have to think about starting a family. Right now I’m ready to go but I don’t want anything to affect that.”

Last week, 150 health professionals from around the world wrote a joint letter to the WHO urging them to consider, “…cancelling or changing the location of the 2016 Olympics,” given the inherent risks involved. “It is unethical to run the risk, just for Games that could proceed anyway, if postponed and/or moved,” reads the letter in part, which details the possibility of a conflict of interest between the WHO and the International Olympic Committee as a reason that the organization hasn’t called for a more serious approach to the health crisis.