Radio Host Neal Boortz To Retire, Will Be Replaced By Herman Cain

Radio Host Neal Boortz To Retire, Will Be Replaced By Herman Cain 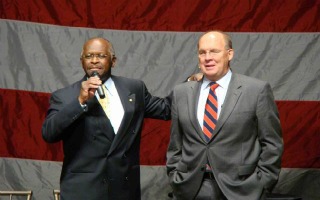 Long-time conservative radio talker Neal Boortz will announce his retirement today, according to a report. The announcement that contains Boortz’s retirement also says that former GOP presidential candidate Herman Cain will replace him early next year.

“It’s time for me and my wife, Donna, to hit the road and travel in ways that we have not been able to through most of our 42 years together,” said Boortz – also known as “The Talkmaster” and “The High Priest of the Church of the Painful Truth.”

The story notes that former Republican presidential candidate and businessman Herman Cain will be taking over Boortz’s “200 radio stations with six million weekly listeners” on January 18, 2013.

Cain has joined Boortz regularly and already gives a daily commentary segment during the morning and evening drive-time rushes.

Cain said, “Neal has spent his career as a bold, vocal advocate of what is right in this world and condemning that which is not. I promise the torch Boortz is handing off to me will blaze as bright, as bold, and as loud as ever.”

WSB Programming Director Pete Spriggs said that Boortz will continue to broadcast to his loyal listeners via the “Boortz Blast” daily rant “whenever he can deliver it.”