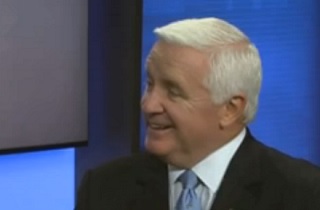 With all of the things that anti-gay politicians and activists compare same-sex marriage to, it’s getting more and more difficult to be surprised or shocked. For example, attorneys for the State of Pennsylvania recently compared gay couples with 12 year-olds. What is surprising is that Governor Tom Corbett (R-PA) denounced the comparison as “inappropriate,” and offered his own more appropriate analogy in an interview with the Harrisburg CBS affiliate’s Sherry Christian Friday morning.

Spoiler alert: Corbett’s judgment of the 12 year-olds comparison as inappropriate was actually just a setup for his big zinger, which is as dull a provocation as any of the others that homophobes use to get attention. What really sets this clip apart is Corbett’s self-satisfied, expectant gaze at Sherry Christian, as he awaits peals of laughter, or maybe panties offered in sacrifice to his totally gay-averse manliness:

Ha! Good one. See, he called the one thing inappropriate, then said something even worse. Classic.

Corbett’s crack is quite a departure from a statement he offered after his office took heat over the initial comparison:

State attorneys said in a court filing Wednesday the gay marriage licenses have no “value or legitimacy” and can’t be defended in court. They compared gay and lesbian couples to children, who can’t marry because a 1996 law says marriage is between a man and a woman.

Corbett released a statement Thursday calling it a poor analogy.

“The case involving Montgomery County revolves around a very basic question: Does a public official have the authority to disregard state law based on his own personal legal opinion about the constitutionality of a statute?” he said. “The analogy chosen in the legal brief filed on August 28th is inappropriate.”

Of course, that was over a month ago, and a lot can change in that time. Somehow, Corbett got the idea that semi-apologizing for that remark hurt him, and that doubling down on it would help him. So much for that outreach we used to hear about lo these many less than a year ago.