Republican PA Gov. Tom Corbett On Ultrasound Bill: ‘You Just Have To Close Your Eyes’
video

Republican PA Gov. Tom Corbett On Ultrasound Bill: ‘You Just Have To Close Your Eyes’ 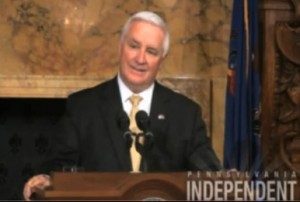 The resistance to the so-called Republican War On Women may have just gotten a new rallying cry. One of the tipping points in that war was the Virginia forced ultrasound law that would have required women seeking abortions to undergo a medically unnecessary transvaginal ultrasound. In discussing a similar measure in Pennsylvania, Governor Tom Corbett (R-PA) told a reporter “I’m not making anybody watch, OK. Because you just have to close your eyes.”

After protests and outrage, Virginia modified their bill to require that women be offered the choice of an external exam before Gov. Bob McDonnell signed it into law, but even the revised law leaves some doubting whether this makes any difference, since the law doesn’t say what happens if that exam is unable to determine the gestational age of the fetus.

Pennsylvania is considering an ultrasound bill of its own, which prompted Corbett’s comments. From ThinkProgress:

Gov. Tom Corbett (R) reaffirmed this week that he supports the anti-abortion measure so long as it’s not obtrusive because women could simply close their eyes during the procedure:

QUESTION: Making them watch…does that go too far in your mind?

CORBETT: I’m not making anybody watch, OK. Because you just have to close your eyes. As long as it’s on the exterior and not the interior.

Critics say Corbett’s comments show he doesn’t understand how the bill would even work. While the Pennsylvania legislation has been amended to remove references to invasivetransvaginal ultrasounds, the language suggests a transvaginal ultrasound could still be required if the embryo is too small. Patrick Murphy, a Democrat running for attorney general, called for Corbett to apologize for his statement. “It’s unthinkable that he would so casually dismiss this by advising women to just close their eyes,” Murphy said.

That’s windowless-van creepy. Corbett’s quote reminds me of nothing so much as the Twin Peaks character Jaques Renault‘s leering intonation of “Bite the bullet, baby!”

Another mandatory ultrasound law just went into effect in Texas, which became national news when several newspapers decided to pull a series of Doonesbury comic strips that satirized the law.

These ultrasound laws are just one prong in a conflict over women’s health care that has been raging over the last two months, and which seemed to come to a head in the backlash to Rush Limbaugh’s sustained verbal attack on Sandra Fluke over her activism in favor of contraceptive coverage. Conservatives deride the term “War On Women” that has been applied to it (by me, among others), and to be fair, from their perspective, perhaps a more apt moniker would be the “War On Those Women.”

Here’s the clip of Corbett’s remark, from ThinkProgress: