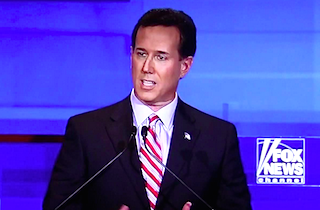 Despite the fact that he was the last man standing before Mitt Romney took the Republican presidential nomination in 2012, Rick Santorum may not qualify for the first GOP debate on Fox News this August. That’s because Fox has said that it will limit the contenders to the top 10 finishers “in an average of the five most recent national polls.”

“I’m probably the best person to comment on this,” Santorum said in response to an inquiry from National Journal. “In January of 2012 I was at 4 percent in the national polls, and I won the Iowa caucuses. I don’t know if I was last in the polls, but I was pretty close to last.”

“If you’re a United States senator, if you’re a governor, if you’re a woman who ran a Fortune 500 company, and you’re running a legitimate campaign for president, then you should have a right to be on stage with everybody else,” Santorum continued. “So the idea that we’re going to arbitrarily—and it’s arbitrary, someone at 1.15 is in, someone at 1.14 is out—that to me is not a rational way.”

By Fox’s standard, Santorum would just barely make the cut if the debate were held today, according to FiveThirtyEight’s Harry Enten. Looking at the last five major polls, Santorum is tied for tenth place with Gov. John Kasich (R-OH), meaning both men would be permitted to participate. But Bobby Jindal, Lindesy Graham and Carly Fiorina would all be left out. Of course, a lot can change between now and then.

Meanwhile, CNN has devised a system for its September debate that will allow any candidate polling above 1%, which includes all the names listed above, to participate in at least part of the proceedings. But another “segment” of that debate will be reserved for those in the top 10.