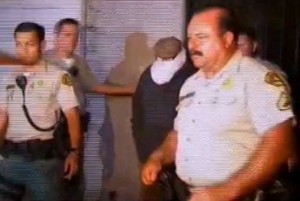 The runner-up for weird right-wing narrative of the day belongs to the strange notion that Nakoula Basseley Nakoula, the man behind the film Innocence of Muslims, is some kind of political prisoner, being silenced and made an example of by the evil Obama administration. The film has been widely cited as the unjust provocation for attacks and protests on U.S. diplomatic installations throughout the Middle East, including, it seems, the terrorist attack on the U.S. consulate in Benghazi. Now, conservatives are spinning the theory that he’s been imprisoned as a way to “muzzle” him until after the election.

Nakoula was arrested in late September for violating the terms of probation stemming from his bank fraud conviction, which made this “Generalissimo Francisco Franco is still dead”-esque item from The Washington Times‘ Kerry Picket seem curious:

Nakoula Basseley Nakoula, the 55-year-old filmmaker responsible for the anti-Muslim video that President Barack Obama, Secretary of State Hillary Clinton, and U.N. Ambassador Susan Rice initially and wrongly blamed for inciting the deadly terrorist attack on the U.S. diplomatic mission in Benghazi, is still being held at the Los Angeles Metropolitan Detention Center (MDC) without bond.

It has been almost one month since Mr. Nakoula was arrested for allegedly violating the terms of his probation for a 2010 bank-fraud conviction. According to reports, under his probation, Mr. Nakoula was prohibited from using computers and the internet without supervision.

Great, thanks for the update. Do bears still enjoy the occasional arboreal evacuation? Is this really worth an Instapundit (home of the Insta-lanche™!) link? A guy who violated his probation a month ago is still in jail. Why is this getting suction in the winger-sphere?

Mr. Nakoula’s next court date is on November 9, three days after the presidential election. In the meantime, while the Obama administration passes blame around over who dropped the ball with the attack in Benghazi, Mr. Nakoula remains locked up and muzzled in a Los Angeles detention center until after the ballots for president are counted on November 6.

Ahhh, I get it. Nakoula is being held under pretextual reasons, to keep him from devastating President Obama’s reelection chances by speaking out, which he obviously has no way of doing while he’s  in jail, because there are no phones in jail.

These people honestly mystify me sometimes. What is it that Nakoula is supposed to be muzzled from saying? “Marry me, Pamela Gellar?”

The strong implication is that Nakoula would expose the fact that he was imprisoned as an example to any who would dare to defy the Muslim world, and their secret president, Barack Obama. It wasn’t because of the, you know, crime he committed.

What makes this nonsense so hilarious, though, is that it doesn’t just bubble around at the bottom of the internet. During their exhaustive “investigation” into the Benghazi attack, Fox News’ Special Report Investigates included this tidbit in a package on the Obama administration’s supposed effort to sell the narrative that Nakoula’s film spurred the protests and the attack:

September 15th, California authorities haul Nakoula Basseley Nakoula, the man that produced the video, in for questioning… and marched him in front of TV cameras.

“Marched him in front of TV cameras?”

You mean the “police” arrested a guy who violated his probation, and reporters were chasing the worldwide attention-getting story? Dun-dun-DUNH!

What possible relevance could Nakoula’s perp walk have in that context, other than…oh, right. It’s that evil NOBAMA, always trying to make an example of bank fraudsters!!!

Well, viewers of Fox News’ special would have no way of knowing that Nakoula was detained for violating his probation, because Fox News never got around to saying that. He was just “hauled in for questioning” and “marched in front of TV cameras.”

Eventually, Mr. Nakoula will get out of jail, and when he does, maybe he can use his new-found hero status on the right to secure financing for his next film, since apparently, these people will buy anything.