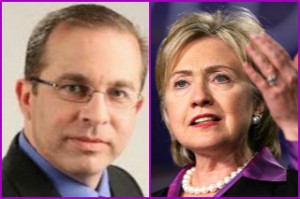 Right Wing radio host Pete Santilli made stunning comments on his internet-based radio show about former Secretary of State Hillary Clinton, saying he “wants to shoot her right in the vagina,” on behalf of “all Americans that you’ve killed.”

I want to shoot her right in the vagina and I don’t want her to die right away; I want her to feel the pain and I want to look her in the eyes and I want to say, on behalf of all Americans that you’ve killed, on behalf of the Navy SEALS, the families of Navy SEAL Team Six who were involved in the fake hunt down of this Obama, Obama bin Laden thing, that whole fake scenario, because these Navy SEALS know the truth, they killed them all. On behalf of all of those people, I’m supporting our troops by saying we need to try, convict, and shoot Hillary Clinton in the vagina.

Santilli, whose website describes himself as a former U.S. marine and Coca-Cola Executive, has previously espoused conspiracy theories about 9/11, the shootings at Sandy Hook Elementary, and President George H.W. Bush’s involvement in the assassination of President John F. Kennedy.

On his site, Santilli also suggests he is ready for national syndication—if the FCC can handle him:

I am a radio talkshow host ready to take my show to national syndication; that is, of course, if the FCC regulated AM/FM radio stations can handle my truth & honesty.