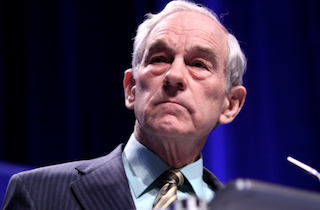 Ron Paul, the former Republican congressman from Texas, penned a piece on libertarian writer Lew Rockwell‘s website today about the “military-style occupation” that took place in Boston following the bombing. Criticizing the “unprecedented move,” Paul suggested that occupation was as frightening — and perhaps more — than the attack itself.

The “forced lockdown,” “militarized police riding tanks,” and “door-to-door armed searches without warrant” were not, as Paul wrote, from “a military coup in a far off banana republic.” The scene took place in Boston after the recent attack — a taste of martial law.

The ostensible reason for the military-style takeover of parts of Boston was that the accused perpetrator of a horrific crime was on the loose. The Boston bombing provided the opportunity for the government to turn what should have been a police investigation into a military-style occupation of an American city. This unprecedented move should frighten us as much or more than the attack itself.

Paul cited the “sadly forgotten” detail that, despite such drastic actions, state efforts did little to aid in capturing the suspect — given that a private citizen found the suspect and then phoned the police. Yes, the situation in Boston was tragic, but the response was an attack on liberties.

“But what of the fact that over 40 persons are killed in the United States each day, and sometimes ten persons can be killed in one city on any given weekend?” he asked. “These cities are not locked-down by paramilitary police riding in tanks and pointing automatic weapons at innocent citizens.”