Limbaugh Flattered By WHCD Shout-Out: Obama ‘Praised Me For Daring To Say What Actually Is’ 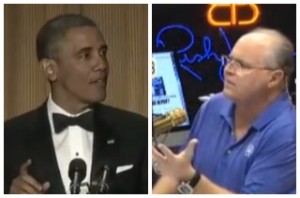 Rush Limbaugh seems pretty happy today that President Obama‘s very first joke at Saturday night’s White House Correspondents Dinner was aimed directly at him. After approaching the podium to the hip hop song All I Do Is Win” by DJ Khaled the president joked, “How do you like my new entrance music? Rush Limbaugh warned you about this, second term baby!”

“I was not even there,” Limbaugh said. “But I was. Opening line, not even there. Not even in the scripted remarks.” He wondered aloud what President Obama could have been getting at by bringing him first thing. “You know what that means?” he asked. “It means: Limbaugh warned you. He warned you. Second term. Look out. No stopping me. He warned you.”

Limbaugh didn’t take it as the jab at his over-the-top, “racially-coded” commentary that Obama likely meant it to be. “It was praise,” Limbaugh said. “The president of the United States praising me for daring to say what actually is. First words out of his mouth.”

Just last week, Limbaugh made his own predictions about the annual White House Correspondents Dinner, saying that CNN and MSNBC would be “praised” while Fox News will be “made fun of.” In fact, all three cable networks got fairly equal treatment from the president, with CNN getting the brunt of the abuse from host Conan O’Brien. Limbaugh explained that he no longer attends the dinner because, really, “why go sit in a room of three thousand people who don’t like you?”