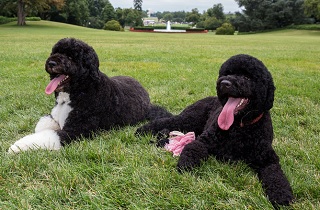 The news that President Obama and the First Family have adopted a second First Dog was not greeted with universal acclaim, and in fact gave one Salon writer paws. Taking a cue from PETA, Salon‘s Susan Nusser took a rather dim view of the “message” that the President sent by adopting Sunny Obama, a pure-bred Portuguese Water Dog like her adopted brother, Bo Obama. Is this a case of emo-prog taken to absurd extremes?

Those Obamas and their, their — dog discrimination. And why, while we’re on the subject, did they choose a straight dog? More confirmation of our patriarchal culture’s grotesque cisgender bias and heteronormative orthodoxy coming from America’s most pro-majority minority family. Look for the term “dogsplaining” to become a thing.

While “dogsplaining” is the funniest thing I’ve heard this week, I think Pazienza is being a little too ruff on Susan Nusser. This is all part of an intramural feud between liberals, like me, who think that a lot of other liberals are overreacting to things like the NSA phone data collection living nightmare. On its face, it does seem a little (or a lot) absurd to trash the President for wanting to get a dog that Bo would get along with, and if Fox News did it, I’m sure there would be copious wagon-circling, but I don’t think Nusser is motivated by emo-prog angst.

Upon hearing the news about Sunny, PETA President Ingrid Newkirk promptly blasted the President’s decision as the “animal-protection world equivalent of kicking a hobo,” which is not something I thought we were calling hobos anymore. The strident reaction seemed clearly designed to drum up publicity for the organization, at the expense of anyone actually taking it seriously.

Nusser, on the other hand, framed her critique in a more reasonable fashion, arguing that adopting a dog from a shelter would have made “a different statement”:

Private shelters — not responsible for strays or, in many cases, owner surrenders — can control the number of animals they take in. This allows them to focus on animal welfare, and other donor-friendly programs. Meanwhile, municipal shelters are left with the dirty work of animal control — enforcing laws, housing and returning strays, and, yes, euthanasia.

This public-private split is a microcosm of a larger society that not only accepts the privatization of former public services, but also creates two categories of individuals. In this case, pets that are charismatic and easily adoptable end up in private shelters. And the aged, injured, ill and undesirable animals who languish in publish shelters, and are most likely to be euthanized.

The object here, it appears, isn’t really to criticize the President, or to start some sort of an “impeach Sunny” movement, but to raise awareness of the plight of shelter dogs. Yes, the President’s adoption of a purebred is the hook to get more eyeballs, but the goal is a worthy one. If Salon just published a piece called “Hey! Dogs In Public Shelters Need Homes Too, Or They’re Gonna Die,” I never would have seen it, and neither would you.

In unrelated news, I’m currently in search of a condescending gastroenterologist, so I can tell him to stop spleensplaining.