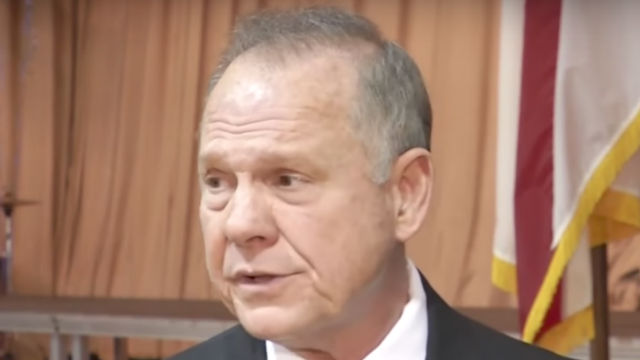 If you had a feeling that Roy Moore would admit defeat to Doug Jones any day now, think again.

The former Alabama senate candidate and alleged child molester filed a legal complaint on Wednesday to challenge the results of the election earlier this month. Alabama Secretary of State John Merrill was supposed to officially declare Jones the winner of the senate election today, but now, Moore’s campaign is asking for a delay and an investigation into certain “irregularities” they’re claiming as signs of potential voter fraud.

“The purpose of the complaint is to preserve evidence of potential election fraud and to postpone the certification of Alabama’s Special Election by Secretary of State John Merrill until a thorough investigation of potential election fraud, that improperly altered the outcome of this election, is conducted,” Moore stated in a press release. “This is not a Republican or Democrat issue as election integrity should matter to everyone.”

CNN notes that Moore’s complaint claims that out-of-state residents participated in the election and fraud experts have determined there was foul play on December 12. Moore also claims to have taken a polygraph test to refute the sexual abuse claims leveled against him over the past two months.

Ever since the election ended, Jones and even President Donald Trump have both recommended that Moore cease his grandstanding and concede the election. Merrill told reporters last night that he has no plan to postpone the board meeting that will certify Jones as the state’s new senator. He said as much today when he spoke with New Day.

Alabama Secretary of State: Doug Jones will be certified today at 2p despite new claims from Roy Moore campaign https://t.co/RdlzRIUiO3

Update 10:05 a.m.: Jones has responded to the legal complaint, saying “This desperate attempt by Roy Moore to subvert the will of the people will not succeed. The election is over, it’s time to move on.”