Rush Limbaugh: Boehner Lawsuit Could Be a ‘Disaster’ for GOP
AUDIO

Rush Limbaugh: Boehner Lawsuit Could Be a ‘Disaster’ for GOP 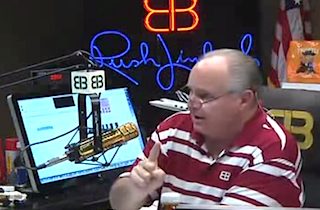 House Republicans voted in favor of Speaker John Boehner’s resolution to sue President Barack Obama yesterday, but Rush Limbaugh isn’t so sure the whole thing is such a good idea. “That could be a disaster if it ever got anywhere,” Limbaugh said of the lawsuit on his radio show Thursday.

And why does he say that? “In the first place, the so-called conservative justices on the Supreme Court have already ruled that Congress cannot sue Obama for not enforcing the law,” Limbaugh said. “It would be a waste of time.”

But more importantly, Limbaugh said he disagreed with the basis of the suit. Essentially, Boehner has said he wants to sue Obama for going around Congress to waive the employer mandate that was initially a key component of the Affordable Care Act. “So it could be said that the Republicans are suing so that Obama will fully implement Obamacare,” Limbaugh said.

RELATED: Rush Limbaugh: I’m Not Part of the ‘Impeach Obama’ Crowd… Yet

“Is that what we want?” he continued. “I mean, if you’re going to sue a guy for not enforcing the law, and the big thing is Obamacare, and you want him, as a result of your lawsuit, to be forced to enforce the law, then I don’t even know if they’ve thought about this.”

Limbaugh predicted that the result of Boehner’s suit could be the full implementation of Obamacare. “I must always have the caveat that I don’t do their job, so I don’t really know what they’re doing,” he added.