Rush Limbaugh Is Outraged By Beyoncé’s ‘Bow Down B*tches’ Single, Because Why Not?
AUDIO

Rush Limbaugh Is Outraged By Beyoncé’s ‘Bow Down B*tches’ Single, Because Why Not? 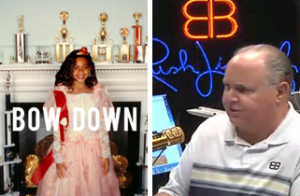 Rush Limbaugh spent a few minutes this morning railing against Beyoncé and what he referred to as her “Bow Down Bitches Tour.” He revealed that he had just read a “major story” about the controversy in The Telegraph and wanted to share some of his own thoughts on the matter.

After reciting a brief history of Destiny’s Child and their history of telling women “not to take any grief from men,” Limbaugh called out Beyoncé for doing a “total 180” with her new single “Bow Down / I Been Down,” in which, according to him, she’s saying “go ahead an put up with it.” Limbaugh posited that this is because she “married a rich guy” (AKA Jay-Z AKA Shawn Carter). “She going to call herself ‘Mrs. Carter’ on the ‘Bow Down Bitches’ tour,” Limbaugh declared. A cursory glance at Beyoncé’s website shows that the tour is called “The Mrs. Carter Show World Tour” and “bow down bitches” is merely a song lyric.

Limbaugh continued his analysis of Beyoncé’s lyrics by saying that after getting married “she now understands it’s worth it to bow down and now she’s passing on this advice” to her female fans. In reality, the song is quite clearly sung from Beyoncé’s point of view, not her husband’s or any other man’s. She’s not telling women to “bow down” to men, but rather to her.

“I know when you were little girls
You dreamt of being in my world
Don’t forget it , don’t forget it
Respect that, bow down bitches

I took some time to live my life
But don’t think I’m just his little wife
Don’t get it twisted, get it twisted
This my shit, bow down bitches”

No one could or should expect Rush Limbaugh to be an expert when it comes to interpreting hip hop or R&B lyrics. And his sole reference point appears to be the Telegraph article, which does criticize Beyoncé, but for an entirely different reason. While Limbaugh appears to think Beyoncé is telling women to “bow down” to their men, Telegraph writer Felicity Capon is upset that Beyoncé is transforming her “beloved single ladies, independent women and survivors, into her bitches.”

And listen to the new single “Bow Down / I Been Down” in its entirety, via GossipCop: