Sarah Palin, Trig, And Journolist…Did Your Head Explode Yet? 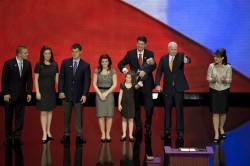 Most of the time it’s hard to muster sympathy for Sarah Palin when it comes to her treatment at the hands of the press; this is a woman who could teach an advanced course in media relations. In fact every day I wonder if she’s doing just that with her Facebook notes. However, when it comes to the ongoing, and inappropriate speculation about her youngest son Trig, I think she has a point.

In her latest note today Palin responds to the Daily Caller’s latest Journolist release (actually more like a dump…there was no pruning or editorializing this time around) in which members of the list discuss whether or not the Trig birther conspiracy theory is fair game to cover. Says Palin:

It’s tough to fittingly describe these numerous members of the mainstream media who actively engaged in the debate about this conspiracy back when I was first introduced as John McCain’s running mate, and it’s impossible to legitimize any “prominent” media publication that continues to traffic in this bizarre narrative today. It wasn’t just a few fringe characters in that JournoList discussion. It included writers for major newspapers, magazines, and online news publications. Those participating in this immature exchange in attempts to plant seeds of doubt and falsely accuse even included a famous historian.

This JournoList exchange exposes the warped nature of today’s media, thus explaining why many of us are forced, in fairness to the public, to utilize other mediums to communicate until the mainstream media wakes up and begins respecting the public’s intelligence and desire for truth in reporting. There is a sickness and darkness in today’s liberal media. With revelations like the JournoList exchanges, may the light keep shining to expose the problem.

Emphasis mine. Because while it is well within Palin’s right to respond loudly and harshly to speculation about her youngest child, using that coverage as an excuse for why she has almost entirely withdrawn from any unscripted media exchange is almost as lamentable as the coverage she is complaining about. Andrew Sullivan, meanwhile, is happy to have some company.