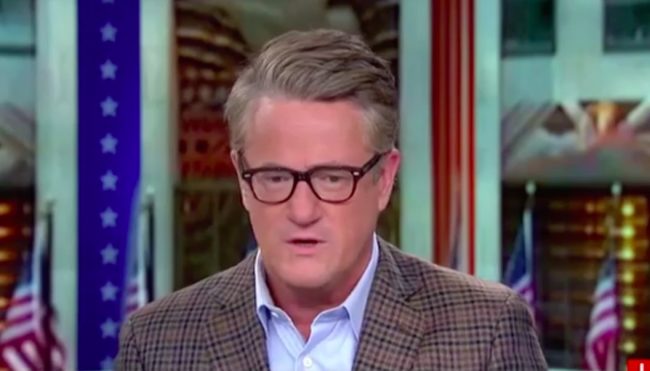 Besides this weekend being the one-year anniversary of President Donald Trump taking office and the beginning of a federal shutdown, it also represents a year since The Resistance took off. A day after Trump’s inauguration, millions of women in dozens of cities around the country took to the streets to march.

With women once again planning marches this weekend to commemorate the groundbreaking and historic event, MSNBC’s Joe Scarborough wanted to make sure American women knew he stood behind them. How’d he do that? Just take a listen below:

My new single is out. Inspired by the Women’s March and dedicated to those who #Resist.
Mika and I salute you??https://t.co/eqg4xO4MtD

Yep, the Morning Joe host debuted a new single titled “Stand,” dedicated to “those who #Resist.” He also wanted it known that Mika Brzezinski also saluted those women.

Well, as you’d imagine, JoeScar tossing out a brand-new #Resistance-inspired song led to widespread mockery on Twitter. Because that’s what Twitter does.

Well this is already the worst shutdown ever. https://t.co/22bMcacj5U

You can tell Joe Scarborough is a Real Rocker because look!—no socks. He is wearing the fuck out of those Mary Tyler Moore cigarette pants tho

what the fuck I love Trump now https://t.co/56WQTSff9i

Does someone interrupt you the entire song? If not, I'm not interested.

Shutdown of 95: Cigars & bongo drums with interns in the Oval Office

I was *going* to make a dick joke but then I saw that Joe Scarborough has a #resistance song dedicated to the women's march and frankly nobody can beat that. https://t.co/iavhhuGmA6

Is this an SNL sketch?