Scarborough Has Plans for Satirical Musical About a Certain 2016 Candidate

Scarborough Has Plans for Satirical Musical About a Certain 2016 Candidate 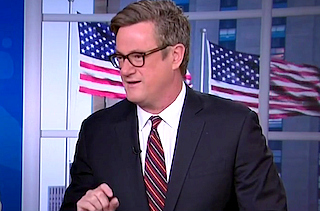 Joe Scarborough says he has big plans for his future, not the least of which is a project that will take his jabs against Donald Trump to the next level.

While Scarborough was known for going easy on Trump during the early stages of the 2016 election, it is no secret that the two of them despise each other now, and they’ve exchanged rough comments about each other for months. Scarborough recently trolled Trump with a hilarious music video about the mogul’s apparent immigration softening, but based on the song lyrics Scarborough shared with GQ, that video was just the beginning:

Music is one of Scarborough’s favorite hobbies, and he’s worked with his band Dixon Mills since the 90’s. While his Trump musical is still in it’s early stages, Scarborough says that he’s preparing to find financial backing, and that he expects his musical will have a Hamilton / The Book of Mormon feel to it once it’s complete.

“There’s enough general-interest knowledge about this guy that I can write basically whatever I want to write.” Scarborough said. “People are like, ‘Well, what if he wins?’ I go, ‘That’s even better!'”