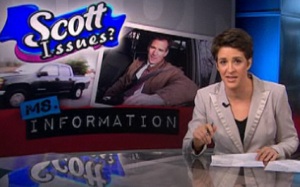 Here’s a weird story. A group of loyal fans of Rachel Maddow started a Facebook Group encouraging the MSNBC host (and part-time resident of Northhampton, MA) to run for Senate, challenging the newly elected Scott Brown. The state Democratic Party chair John Walsh got wind of this, and in what appears to be a failed direct Tweet, sent his email address and cell number to @maddow, in hopes of…chatting? This, then, inspired the Brown campaign to, yes, ask for donations to fend off the “liberal MSNBC anchor!”

Some are talking about you running vs Scott Brown in ‘12. I’m Chair of MA Dem Party. My email is johnewalsh@XXXXX.net cell-617-650-XXXX

First of all, it appears that the Massachusetts Democratic Party needs to hire a social media consultant (or just someone under the age of 30?) Secondly, that’s hardly evidence that Maddow is going to be running for office (though she would sort of be a perfect fit in Massachusetts, right?)

It’s only been a couple of months since I’ve been in office, and before I’ve even settled into my new job, the political machine in Massachusetts is looking for someone to run against me. And you’re not going to believe who they are supposedly trying to recruit — liberal MSNBC anchor Rachel Maddow.

Rachel lives in western Massachusetts, and recently it was reported that the chairman of the state Democratic Party had apparently tried to reach out to her in an attempt to coax her into a race against me. You can read about it here.

The political season never ends, which is why I need your continued support. While my opponents strategize on how to defeat me in 2012, I’m going to continue to speak out against higher taxes, more spending and greater government control in our lives.

I relish being an independent voice in Washington, one that doesn’t march in lockstep with the rest of the Washington crowd. The Democratic Party bosses in Massachusetts disagree. They want a rubberstamp who will vote for their plans to expand government, increase debt and raise taxes. Someone like Rachel Maddow. I’m sure she’s a nice person — I just don’t think America can afford her liberal politics.

Rachel Maddow has a nightly platform to push her far-left agenda. What about you? I’d like to encourage ordinary American citizens concerned about the future of their country to get more involved in our government. I hope you were encouraged by my victory to become more politically active, maybe even become a candidate for office yourself. We can continue to push our movement forward by running for office, joining in rallies and petitions that challenge President Obama and Nancy Pelosi’s healthcare legislation, supporting campaigns against the tax-and-spenders or by donating time and money to office-holders and candidates who will restore the principles of our founders.

I’m grateful you are with me. Thanks again for whatever support you can provide me, and I look forward to joining in further victories with you down the line.