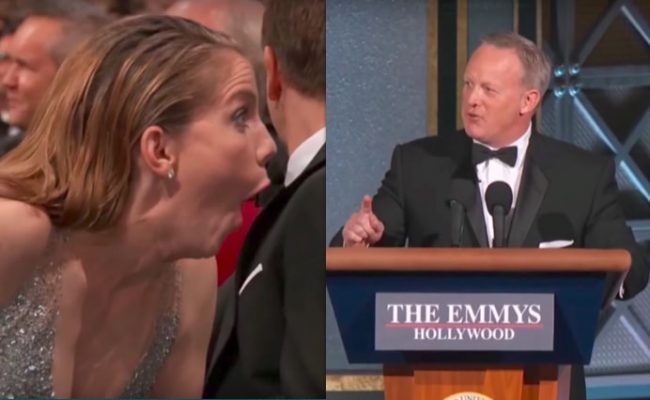 The road to image rehab can be a long one.

Former Trump Press Secretary Sean Spicer revealed he was well along the path last night during a brief star turn at the 2017 Emmy Awards.

After an introduction by Stephen Colbert, Spicer rolled up with his own wheeled podium — in a nod to Melissa Mccarthy’s iconic portrayal of him on Saturday Night Live.

“This will be the largest audience to witness an Emmys, period! Both in person and around the world,” said Spicer.

You get? Crowd sizes? Ok good. It was kind of funny — I guess.

The moment lasted less than a minute but for some on Blue Check Twitter, the sight of the former press secretary in any state other than public flagellation was too much to bear.

Sean Spicer is an opportunist who regularly lied directly to citizens as the spokesperson for an elected leader. Did I miss the funny bit?

The treatment of Spicer is another breakdown of political norms. If we just joke about and reward people who lie in government, more will.

… This guy must kill at dinner parties.

And it basically went from there.

I’m not ready to laugh “with” Sean Spicer. I think he is an evil, opportunistic liar that hurt our country.

Emmys helped Spicer pump up his “lecture” fees which is all that matters to him now. https://t.co/nzo5n8VuYx

I don’t hate Sean Spicer but I’m not willing to have a laugh with him just yet. He lied to us day after day in defense of the indefensible. https://t.co/tbdgdNiafM

Shame on the Emmys for the Spicer validation. He is dedicated to demeaning our craft and restricting our freedoms of speech. #Unforgivable

Good morning to everyone except whoever thought “softening” Sean Spicer through pop culture participation would be funny and edgy pic.twitter.com/dFwovCuDm1

DT is a sick liar. If we reward Sean Spicer for enabling his sickness,we are saying we accept a mentally ill POTUS.

When U.S. history records the crimes of this administration—and the names of its enablers—Sean Spicer on the Emmys will be a VERY bad look.